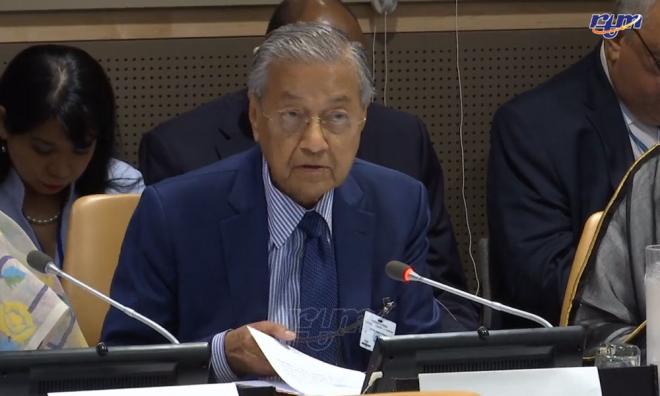 Dr Mahathir Mohamad said the international community, instead of preparing for war, should be paying attention to the climate changes and accompanying natural disasters.

"We should be preparing to combat climate change, to bring back the normal environment we had been used to over the last thousands of years," the Malaysian prime minister said.

In his statement at the General Debate of the 74th Session of the United Nations General Assembly in New York, Mahathir said countries should also be preparing for major earthquakes, typhoons and hurricanes, floods and landslides.

"We should learn how to mitigate these natural disasters. We should be constructing shelters, make rain and grow food without sunlight, evacuate the seaside et cetera,  et cetera," he said.

The Malaysian leader stressed that teams of well-equipped disaster experts should be at the ready to rush to disaster areas, underscoring that every disaster is a world disaster.

"All these natural disasters may not happen of course. But we cannot rely on that. We are wasting our money preparing for wars, inventing ever more destructive weapons when all of us may be wiped out by natural disasters as the planet goes through its next cycle," he said.

He said human creatures are clever and can still survive the next cycle if they set researchers to come up with defences against catastrophes.

"If we reduce our budget for killing people, we will have the funds for research and preparation," he said.