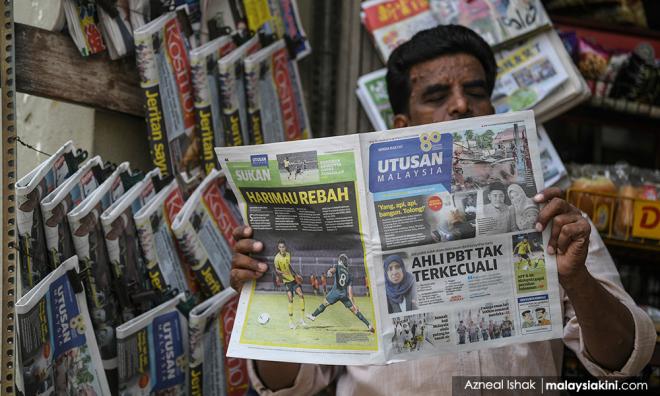 Kadir said it is inappropriate for Utusan to expect Mahathir's intervention, especially when Umno seeks to maintain control of the newspaper.

He pointed out that unlike Umno's sale of its Media Prima stake, the party continues to seek to control Utusan.

"If they don't want to sell, how is Mahathir or any third parties going to intervene to help Utusan?" Kadir, who is also the prime minister's media adviser, said in a blog post.

While Umno sold its 31.61 percent stake in Utusan Malaysia for RM6.65 million in February, the buyer was its own former Kulim-Bandar Baharu MP Abd Aziz Sheikh Fadzir, who is also the chairperson of the Utusan Group.

Kadir, who is writing in his personal capacity, argued that this is to keep Utusan within Umno's control.

"The answer is Umno does not want outside intervention. This is backed by the fact that Umno injected RM1.6 million into Utusan last month,"

In contrast, Umno, in July, disposed of its 11.09 percent stake in Media Prima to tycoon Syed Mokhtar Al-Bukhary.

Kadir, who is the former group editor-in-chief of the New Straits Times Press, said he knows that Mahathir does not want to see Utusan die as the newspaper used to be his choice the first time he became prime minister.

However, he also noted that Utusan had launched a fierce attack campaign against Mahathir when he was trying to "save the country from kleptocracy".

"I do not see the logic of involving Mahathir in any efforts to rescue Utusan. Only Umno can determine if Utusan lives or die.

"Or perhaps Umno has lost its stake and control of Utusan but is refusing to admit it and continues to pretend as if it owns the media group," he said.

Last Week, the Utusan branch of the National Union of Journalists urged Mahathir to intervene to help the financially troubled newspaper.

"We hope our political differences can be put aside. The mentality of newspapers produced by the company has changed for our survival," said the union.