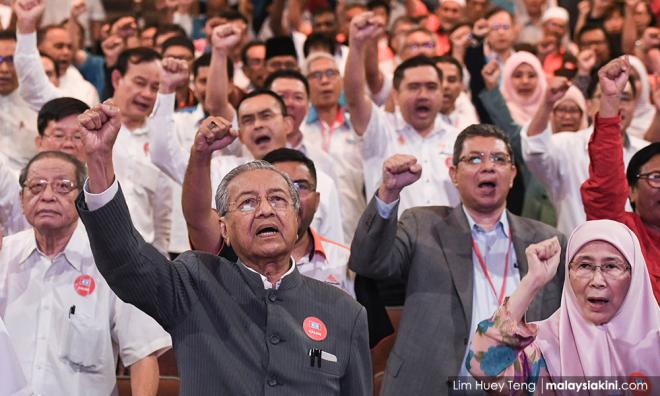 MP SPEAKS | It is more than 500 days since the historic 2018 general election that saw the "impossible dream" of Malaysians realised - changing the government through peaceful and democratic means for the first time in six decades.

All Malaysians who had dreamt this day had high hopes of the Pakatan Harapan government in Putrajaya, and so have the leaders of the four parties - DAP, PKR, Bersatu and Amanah - which made up the ruling coalition.

But they were totally unaware of the magnitude of the rot which the Najib Abdul Razak premiership had left behind.

The country was in debt for over a trillion ringgit, the national institutions have lost their independence and professionalism as they were subverted by the former prime minister and the country had lost the respect of the international community as it became a global kleptocracy.

Harapan ministers and deputy ministers were shocked to find that they had to address the rot that had been left behind by the previous government before they could proceed to implement the Harapan promises of a New Malaysia where the country can become a top world-class nation of unity, justice, freedom, excellence and integrity.

There is widespread disappointment and disillusionment among Harapan voters and supporters who had expected political, economic, educational, socio-cultural changes in the past 500 days.

It is imperative that Harapan make Malaysians understand that the re-setting of nation-building policies after the deep rot left behind by the previous government and the building of a New Malaysia is a national mission which will take a generation to accomplish.This cannot be achieved in just one general election cycle.

But the Harapan government must now embark on re-setting the nation-building policies based on the five promises outlined in the Buku Harapan which was unveiled to the people in the 14th general election, namely:

Malaysians must not allow the only chance for the country to become a world-class nation of unity, justice, freedom, excellence and integrity to be sabotaged by unscrupulous and unprincipled politicians wanting to regain political power by using fake news and hate speech to promote racial and religious polarisation.

It might be useful to compile a catalogue of the fake news and hate speech which had made their rounds in Malaysia in the past 500 days.

Forty years ago, when Chinese Malaysians visited China, it was a from a rich country to a poor and backward nation. Today, the reverse had taken place – a visit from Malaysia to China is a trip to a more developed and prosperous nation.

In 40 years of economic reforms, the World Bank reported that China has brought 850 million people out of poverty while its per capita GDP had increased 24 times.

How does Malaysia compare with China, which does not have a New Economic Policy (NEP)?

Malaysia’s per capita GDP increased by some eight times in the past four decades, while the United Nations special rapporteur on extreme poverty and human rights, Philip Alston, said recently that Malaysia had undercounted the number of the poor. He said the report that 0.4 percent of households, or about 27,000 housesholds, are below the poverty line income is a gross underestimation.

Last week, there were reports that Malaysia is even losing out to Vietnam which should come as a wake-up call to Malaysians to put their shoulders to the wheel to transform Malaysia into a world-class nation.

Instead, we continue to be bogged down by false issues, especially in recent months, with an upsurge of fake news and hate speech to bring about racial and religious polarisation in the country, which is reckless as it could provoke racial or religious conflict.

Malaysians must strike out courageously in the direction of a New Malaysia, for which we have received a mandate from the voters regardless of race and religion.

I once said that Pakatan should not try to out-Malay Umno and out-Islam PAS, and it was immediately distorted as proof that I am anti-Malay and anti-Islam.

This is the height of mischief and diabolism.

What I meant is that Harapan should not out-Malay Umno, just as it should not out-Chinese MCA or out-Indian MIC, or out-Christians or out-Buddhists or out-Hindus, but that the coalition should be a model Malaysian political party which fully upholds the Federal Constitution which provides for Islam as the official religion but freedom of worship for all other faiths.