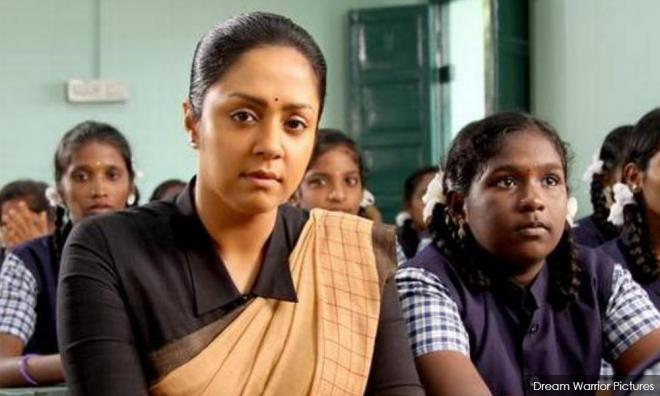 Education Minister Maszlee Malik wants society to share stories of the successes of teachers they know to inspire other educators.

Referring to the character of a firm headmistress Geeta Rani (above) in the Tamil film Raatchasi (female demon) from India, he believed there were many Geeta Rani in the country.

“We want to give our appreciation to these superheroines. There are many more of these unsung heroes. We urge parents or students who know of a great principal, headmasters or teachers to share about them with the Education Ministry,” he said.

He said this after attending a special screening of Raatchasi together with the publisher and director of the film at a shopping complex in Puchong today. The screening was also attended by over 100 teachers, headmasters and district education officers in the Klang Valley.

Raatchasi, directed by S Gowthamraj is about a firm and brave headmistress. The character Geeta Rani played by actress Jyotika faces a myriad of challenges in bringing changes at a weak school with lazy teachers.

Her firmness eventually brought success when all the pupils performed excellently in sports and important examinations with the aid of teachers, parents and the local community.

Maszlee said the aspiration of Geeta Rani could be applied in the national education scenario such as turning a school not only into a medium to educate but also as something belonging to society and returning it to society.

“Similarly too, we saw Geeta eating together with her pupils. I also encourage our teachers to do this, especially when we will be starting the free breakfast programme for pupils from next year,” he said.

Earlier, the Raatchasi film production from India was reported to have expressed their appreciation to Maszlee over his support for the film.

The company addressed a two-page letter to Maszlee, who praised the storyline in the film in the effort to develop the national education system.