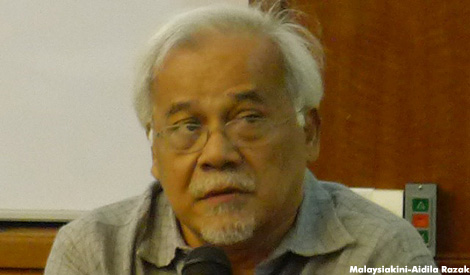 The Malaysian Institute of Economic Research (MIER) has urged the government to re-introduce the Goods and Services Tax (GST) in the 2020 Budget at a lower rate of three percent.

Describing the GST as a tax regime that is fair to all walks of life, MIER chairman Kamal Salih (above) said the GST was the system that kept the government afloat when the crude oil price declined to below US$36 per barrel in 2015.

“GST is a fair system, but some people said it is regressive because the poor will be affected.

“But we have exclusion clauses that will protect the lower income group or B40,” he told reporters after witnessing the signing of seven Memorandums of Understanding (MoUs) between MIER and seven associations and entities in Kuala Lumpur today.

Kamal said while the Pakatan Harapan government abolished the GST and replaced it with the Sales and Services Tax (SST) last year, he was one of the economists consulted who were against the idea.

“Because no matter how you expand the SST to different sectors or how the enforcement is done, it will still not be enough to fill what (income) has been produced by GST,” he said.

Meanwhile, he also said the government needs to introduce a stimulus package in the 2020 Budget.

“Otherwise, they are going to be stuck at the fiscal deficit of 3.4 percent of gross domestic product (GDP) and have to borrow more money,” he said.

He expressed optimism that with a new round of investment initiatives in the stimulus package, the government would be able to draw more foreign investment amounting to as much as RM1 trillion, equivalent to the current government debt, into the country.

Kamal said the upcoming budget should prioritise problems such as the high cost of living, affordable housing and employment faced by the people.

Meanwhile, he said the seven MoUs signed today would bring potential investments totalling US$42 billion to the country, expected to be realised in five years’ time.

The MoUs, mainly in the renewable energy, waste management, oil and gas, maritime and education sectors, were signed under MIER’s Crouching Tiger Research Plan launched on July 29, whereby MIER would consult and provide pre-feasibility studies for the relevant industry while at the same time assist the government and private sector in achieving the Shared Prosperity Vision 2030.

Thus far, he said, 29 MoUs have been signed under the plan, with most of the deals being private-funded projects.