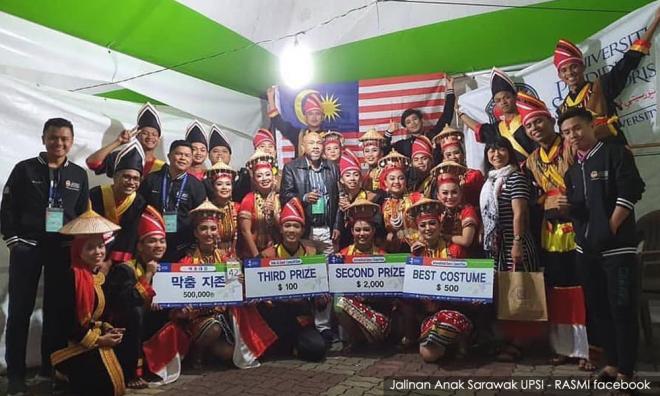 It was a proud moment for Malaysia when the team from Universiti Pendidikan Sultan Idris (UPSI) bagged the runner-up title in the Cheonnan World Dance Festival Competition 2019 here last night.

The team comprising 26 students was all the more proud as it clinched the top spot in the Best Costume category, second place in the Funny Dance Battle category, and third spot in the Solo and Duet category.

Accompanying lecturer Dr Colleen Wong, who is also the head of UPSI’s Department of Performing Arts, described the team's success as an achievement as they managed to beat other teams who were mostly made up of professional dancers from 17 participating countries.

“I am proud and feel very grateful that although all of our dancers are still students, they are so committed and have given their best for Malaysia,” she told Bernama here today.

The Malaysian team mesmerised the crowd with a magnificent performance of the traditional Sarawak Bidayuh dance called "Sigar Nyikuh Jojak", that is usually performed during the harvest festival in the final stage of the competition, which was also broadcast live on a local television station.

Meanwhile, Federation of International Dance Festival (FIDAF) Malaysia president Mohamad Noor Rosli Baharom said it was a feat for the team which managed to beat the other teams comprising mainly professional dancers.

The teams were from Europe, Latin America and Asia, and had extensive experience performing on the international stage, he said.

Mohamad Noor Rosli said the team from UPSI had also successfully showcased Malaysia's rich and diverse multi-ethnic society which drew much attention among the audience.

He said FIDAF Malaysia also congratulated UPSI for giving its strong support and commitment which enabled its students to represent the country.