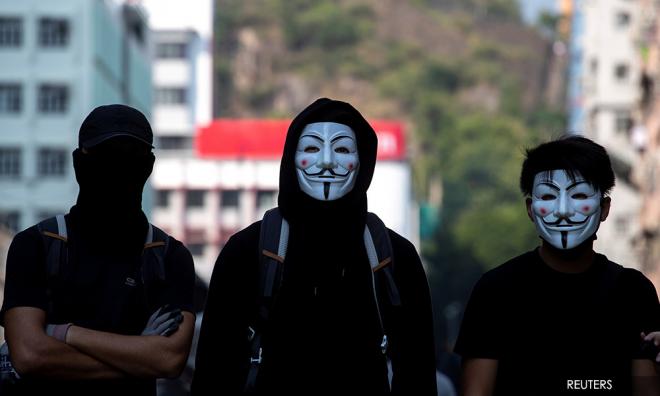 Hong Kong’s embattled leader Carrie Lam on Friday invoked colonial-era emergency powers for the first time in more than 50 years in a dramatic move intended to quell escalating violence in the Chinese-ruled city.

Under this legislation, Lam said she would enact a new regulation banning face masks, which have been widely used by protesters to hide their identities over nearly four months of unrest.

Lam said it was a difficult, but necessary decision to take at a time of “critical” danger for the financial hub. She admitted, however, that there was still a chance the move would escalate, rather than defuse the violence, while not ruling out further measures.

The former British colony is embroiled in its biggest political crisis since its handover to Beijing in 1997.

What began as opposition to a proposed extradition law, that could have seen people sent for trial in mainland courts, has grown into a broad pro-democracy movement and a serious challenge to Chinese leader Xi Jinping.

What are the emergency regulations?

Under the Emergency Regulations Ordinance that was tabled in 1922, a relic of the British colonial era, the laws grant the city’s chief executive the power to “make any regulations whatsoever” on “occasions of emergency or public danger”.

The legislation allows “censorship” of publications including the media, arrest, deportation, detention, seizure of property, and authorises the entry and search of premises. While Friday’s move involved only the mask ban, Lam did not rule out taking further action if the situation continued.

Lam said people should not see this as Hong Kong being in a state of emergency, but a means to end the violence, aid police enforcement and restore order.

Will it keep people off the streets?

Early indications suggest that it may be counterproductive or even inflammatory, at least in the short term. Even before the bill was confirmed on Friday afternoon, thousands were gathering in the central business district and some shopping malls, with many sporting masks and chanting.

Hong Kong has a deeply-ingrained culture of mask-wearing, stemming in part from public health crises in recent decades, particularly the SARS and bird flu outbreaks. Many people routinely wear masks on trains and buses across the congested city, and teachers and pupils often wear them in schools. Police walking into courts often sport them, too.

One factor promoting widespread use of masks during peaceful protests is growing fears among workers that, despite the right to protest being a core Hong Kong freedom, they could face trouble with their employers, particularly if business owners have close connections to Beijing.

Pro-democracy lawmakers criticised the move, saying new laws must involve legislative scrutiny and approval. Lam said while the law would take effect on Oct. 5, it would later be scrutinised in the city’s 70-seat legislature that re-opens in mid-October. Some critics have already said they might seek a judicial review to challenge the anti-mask law.

“The new law is clearly in breach of the Basic Law and therefore unconstitutional because as from 1/7/97, only the legislative council can enact laws including subsidiary legislation,” Martin Lee, a veteran democrat and one of Hong Kong’s leading barristers, told Reuters.

Professor Simon Young, of the University of Hong Kong’s law school, said the government’s move would still need to be squared with the freedoms outlined in 1991 Bill of Rights. That bill allows some freedoms to be effectively suspended if a public emergency threatening “the life of the nation” is declared, but the government has yet to take that step.

What is the anti-mask regulation?

The law prohibits masks or other facial coverings during public meetings and processions, as well as unlawful assemblies and “riots”. Offenders could be jailed for up to one year and fined up to HK$25,000 (US$3,190).

“Freedoms are not without limits,” said Lam, when asked whether this move would trigger more anger amongst a public already bristling at what many see as a steady erosion of individual liberties under Chinese rule.

Hong Kong returned from British to Chinese sovereignty in 1997 with the guarantee of a high degree of autonomy and freedoms not allowed in mainland China, under a so-called “one country, two systems” arrangement.

Was China behind this move?

Lam said in a press conference that this was a decision made by the Hong Kong government and a high-level body of government advisors called the Executive Council. She said that during her brief trip to Beijing earlier this week to celebrate National Day, she had not met any Chinese officials to discuss this matter.

China’s Hong Kong Affairs Office later said it supported the anti-mask law, warning that the protests were evolving into a “colour revolution” - a term coined to refer to popular uprisings in Ukraine and other former Soviet states that swept away long-standing rulers - with interference from external forces.