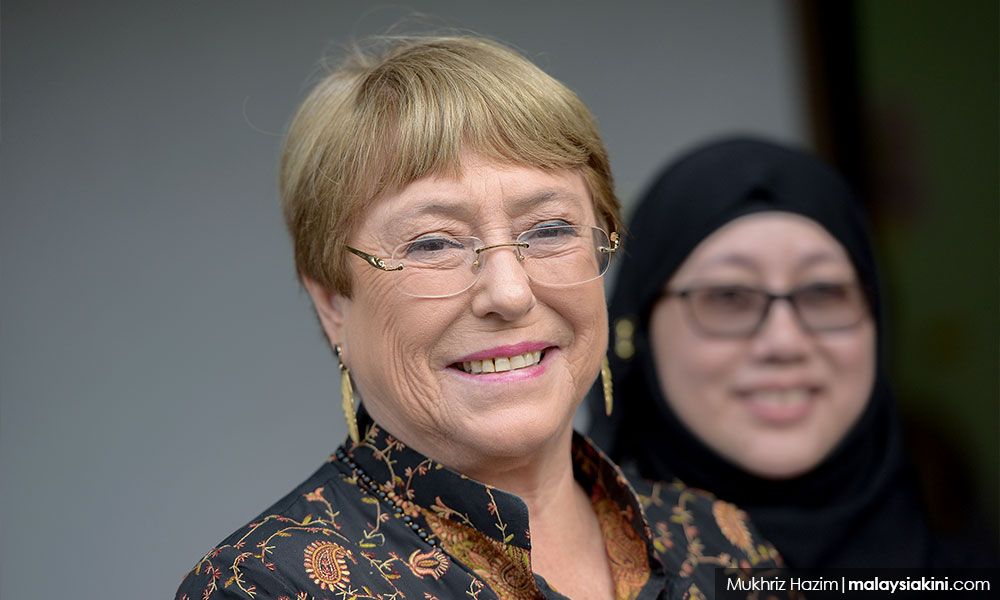 COMMENT | I would like to begin by thanking the government of Malaysia for its invitation to this beautifully diverse country. I am honoured to be the first-ever UN high commissioner for human rights to have visited Malaysia.

It was a short visit but I have benefited greatly from open, receptive and frank exchanges in all my meetings – with Prime Minister Dr Mahathir Mohamad, other government ministers, as well as with the national human rights institution, Suhakam, and a broad range of civil society organisations.

We discussed many of the human rights issues Malaysia is grappling with, efforts to introduce reforms, achievements and setbacks along the way. I do believe that the government is committed to taking the human rights agenda forward.

Yet - speaking both as high commissioner and as a former head of state myself - I also understand the complexity and hurdles they face.

Malaysia is a diverse, multi-ethnic and multi-religious society with parallel legal systems and a federal system in which states have considerable powers and diverging approaches.

There are strong aspirations for positive change but concerns about how the changes will affect the interests of different sectors of society.

I encourage the government’s ongoing efforts to promote unity and interfaith harmony and am interested in the proposal to establish a National Harmony and Reconciliation Commission.

One key challenge is how to tackle hate speech, carefully distinguishing between permissible speech and speech that may amount to incitement.

The Rabat Plan of Action adopted in 2012 and grounded in international human rights law, provides useful guidance in this respect, and I have offered the assistance of my office - the Office of the UN High Commissioner for Human Rights (OHCHR) and other UN human rights mechanisms to further explore this.

I also welcome the steps to establish a new independent police complaints commission which will be an important step towards addressing long-standing problems of torture, ill-treatment and deaths in custody, as well as steps to upgrade some of the more antiquated prisons.

I encourage the government to follow up, in a transparent manner, on the important recommendations made by the Institutional Reforms Committee.

I appreciate the policies and strategies aimed at the advancement of women and I understand a number of laws are pending on sexual harassment in the workplace and amendments to the Domestic Violence Act.

On the issue of child marriage, we discussed how to work towards a harmonised standard across the country, raise the minimum age for compulsory education, and address contributing factors such as teenage pregnancy. I also encourage the government to move forward on a comprehensive gender equality bill to tackle discrimination.

Yesterday, I was able to visit an alternative learning centre for Rohingya refugees. I do hope that the legal recognition of refugees can be strengthened and the right to education and access to the job market can be ensured for all refugees – Rohingya and others.

We spoke about the government’s efforts to ratify international human rights treaties, and the need to clarify across the diverse communities in Malaysia that human rights reforms are not intended to be against one group or religion, but that they will benefit society as a whole and are necessary to achieve the 2030 Agenda for Sustainable Development. The agenda emphasises a holistic approach to achieving sustainable development for all and leaving no one behind through its 17 Sustainable Development Goals (SDGs).

I commend the government’s determination to make progress on the SDGs on many fronts. I believe the SDGs can be the basis for a new social compact and an opportunity to build a broader, truly inclusive constituency for human rights. I was particularly impressed by the vision of a “Compassionate Islam” intersecting with the SDG goals and reinforcing their strength.

I also stressed that the SDG imperative to leave no one behind means it is essential to identify and meaningfully address the situation of the most vulnerable, and to target affirmative action policies on the basis of need, using good, disaggregated data to identify the situation of specific communities.

Human rights for all

Leaving no one behind also means ensuring that the right to freedom of religion is fully respected, including for those belonging to minority religions and sects.

It means protecting the rights of indigenous people, including their land rights, through meaningful consultation, and ensuring development, business and human rights go hand in hand. Proposed amendments to the Aboriginal Peoples Act 1954 and the National Convention on Orang Asli are positive steps to take forward.

It also means taking measures to promote gender equality and to prevent violence against women and end harmful practices, including female circumcision, as recommended by the UN Committee on the Elimination of All Forms of Violence Against Women.

It means ensuring that people are not deprived of their human rights and are not subjected to violence because of their sexual orientation or gender identity.

It means tackling the problems of statelessness and ensuring access for refugees and undocumented migrants to their economic and social rights, including education, healthcare and access to livelihoods.

It means prioritising climate change action, in dialogue with those most affected, such as coastal fishing communities and farmers, as well as the business community in line with the UN Guidelines on Business and Human Rights. Ongoing deliberations on the proposed Climate Change Act and national adaptation and mitigation measures are welcome.

I hope the government will proceed to roll back some of the laws which for a long time impeded freedom of expression and public debate, including the Sedition Act 1948, the Communications and Multimedia Act 1998, the Peaceful Assembly Act 2012, and the Official Secrets Act 1972.

My meetings with civil society working on a wide spectrum of economic, social, cultural and political rights revealed very committed and well-informed groups that have high expectations for the government to deliver on its human rights commitments and obligations.

This is as it should be, and I encourage the government to work together with civil society actors, religious leaders and local and state leaders in making the case for the advancement of human rights for all Malaysians. It is essential that human rights defenders be protected from harassment or threats in relation to their important work.

There are strong aspirations for change and great hope placed in the current administration – I hope the government will be able to ensure that the momentum is sustained and built upon.

In a country with such a youthful population, and with the lowering of the voting age from 21 to 18 in July this year, I call on young Malaysians from all walks of life to engage with political and policy-making processes, to hold their state institutions accountable and ensure decisions are made through meaningful consultation.

I would like to end with a call to all Malaysians to celebrate the kaleidoscope of ethnicity, religion, language and other identities that make Malaysia so special –by standing up for the rights of others, especially those whose beliefs, background or other status differ from yours.

And - this is crucial - please be suspicious of, and spurn, any efforts to stoke racial or religious hatred, online and offline. It is easy to create divisions in society but so difficult to repair the social fabric once it has been damaged. Only when we seek to protect the human rights of all of us can we hope for lasting stability and prosperity.

My office, including through my regional representative in Thailand, stands ready to engage, advise and accompany the government and people of Malaysia in supporting the human rights agenda.

MICHELLE BACHELET is the UN high commissioner for human rights and former president of Chile. The above are her remarks the at end of her recent two-day visit to Malaysia.