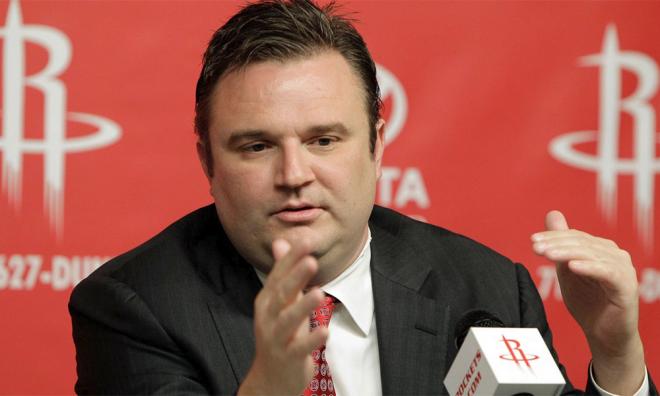 The general manager of the Houston Rockets basketball team apologised on Monday for a tweet in support of Hong Kong protests, saying he did not intend to offend fans in China, where business partners halted work with the NBA team.

Although Daryl Morey (above) had quickly deleted the tweet on the weekend, sportswear brand Li-Ning and sponsor Shanghai Pudong Development Bank (SPD Bank) said on Sunday they were suspending cooperation with the Rockets.

"I did not intend my tweet to cause any offense to Rockets fans and friends of mine in China. I was merely voicing one thought, based on one interpretation, of one complicated event," Morey tweeted, adding he had now considered other perspectives.

"My tweets are my own, and in no way represent the Rockets or the NBA," he said.

The Rockets are widely followed in China, partly because they drafted Yao Ming in 2002, who became a star and helped build the NBA's following in China.

Morey's initial tweet included an image captioned: "Fight For Freedom. Stand With Hong Kong". The post has since been removed, and team owner Tilman Fertitta went on Twitter to distance the team from the statement.

"Daryl Morey does not speak for the Houston Rockets," he said on Saturday. "Our presence in Tokyo is all about the promotion of the NBA internationally and we are not a political organization."

The Rockets, playing games in Japan, could not be reached for comment outside of business hours.

In a separate statement, the NBA said it recognised Morey's views have "deeply offended many of our friends and fans in China, which is regrettable."

"We have great respect for the history and culture of China, and hope that sports and the NBA can be used as a unifying force to bridge cultural divides and bring people together," it said.

Shortly after their statements, Morey and the NBA faced a backlash on social media.

"As a lifelong @HoustonRockets fan, I was proud to see @dmorey call out the Chinese Communist Party's repressive treatment of protestors in Hong Kong," Texas senator Ted Cruz said on Twitter.

"Now, in pursuit of $$, the @NBA is shamefully retreating."

Sportswear brand Li-Ning on Sunday strongly condemned Morey's initial tweet in support of anti-government protests that have plunged Chinese-ruled Hong Kong into its worst political crisis in decades and a major challenge to Beijing.

"We want to express our indignation and strong condemnation," read a statement from Li-Ning, published on the Twitter-like Weibo platform. "We have already stopped our cooperation with the Houston Rockets, and continue to urge them to give a clear answer on this matter."

China's SPD Bank also said on Sunday that it has suspended marketing activities and publicity.

Neither statements said whether the decisions were permanent. The pressure on the Houston Rockets has not purely been about business.

Shortly after the announcement by both businesses, Chinese state broadcaster CCTV's sports channel said it would halt any further broadcasts of Rockets' games starting on Sunday.

The Chinese consulate general in Houston also issued a statement saying it "made stern representations to the Rockets and requested them to clarify, to immediately correct any mistakes, and to eliminate any negative influences".

The Chinese Basketball Association, chaired by Yao, said it was suspending "exchanges and cooperation" with the Rockets.

It did not detail the nature of the cooperation or how long the suspension would last. Reuters' telephone calls to the association to seek comment went unanswered.

Basketball fans in China also criticised the Rockets on Weibo.

"I watched the Rockets for 21 years, but I'm still a Chinese person first and foremost," said one user in response to the basketball association's announcement.

Another said: "We Chinese basketball fans call on either Morey to apologise or the Rockets to fire Morey. If this doesn't happen, then we call on fans to boycott watching Rockets games."