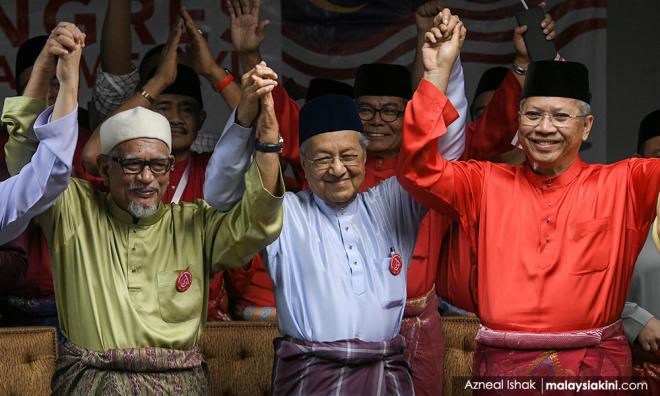 Umno deputy president Mohamad Hasan has urged Prime Minister Dr Mahathir Mohamad to pull Bersatu out of Pakatan Harapan and team up with Umno and PAS for the sake of Malay unity.

"The Malay Dignity Congress that took place on Sunday confirmed what Umno and PAS have been saying all along.

"That the position of Islam as a federal religion and the importance of the Malays and other native peoples are being eroded under the Harapan administration of the alliance," claimed Mohamad, who also known as Mat Hasan.

"This conclusion, by academicians and politicians, was also acknowledged by Mahathir in his closing speech. Even though he tried to put the blame on Malays and Umno, he could not deny the weakness of the Harapan government," he said in a Facebook post yesterday.

Mat Hasan quoted Mahathir himself as saying that the Malays had allowed themselves to be split and surrender power until their dignity was trampled upon and viewed negatively by the other races.

"Clearly, the Malays who are the majority in the country should be united, but they are split into small groups, so they cannot control over half of the people's support.

"I agree with Mahathir's request that Malays and Muslims be united. But what kind of unity?"

"A small group of Malays/Muslims should join a bigger group," Mat Hasan (above) said.

"Today the biggest group of Malays/Muslims support the idea of the unity of the ummah (community). I believe Umno and PAS have no problem to accept the participation of Mahathir and Bersatu in this Malay/Muslim agenda," he said.

He asked the prime minister if he was willing to sacrifice his position and interests so that the power of Malays/Muslims in this country could be restored.

"If Mahathir is honest and wants to see Malays/Muslims become a strong political power, he should have no problem compromising with Umno and PAS," he said.

He accused Mahathir of only seeing things from his own point of view.

Mat Hasan said there are many decisions of the Harapan government that have caused Muslims and Malays to be angry and disappointed and feel insulted in our own home.

"If it is true that he is honest and sincere and he wants the positions of Malays and Islam to be restored, tomorrow he can build a new government with the cooperation of BN, PAS and friends from Sabah and Sarawak," he said.

"But Umno and PAS should be given a significant role in restoring this country. We don't want to be just passengers.

"It's up to Mahathir to make a decision because at the moment the majority of Malays/Muslims have decided to reject Harapan," Mat Hassan added.