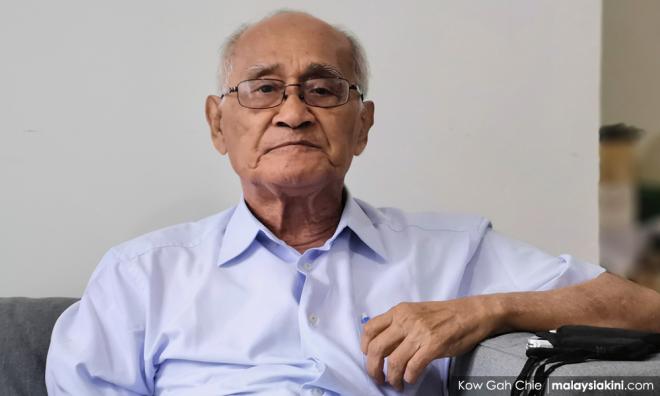 YOURSAY | ‘It would appear that Dr M is intent on sailing Harapan into the rocks.’

Anwar's head to roll if he stands up to Dr M, says Syed Husin Ali

Kim Quek: Yes, those who are politically savvy know it right from the beginning that PKR leader Anwar Ibrahim has been walking a tightrope with respect to Prime Minister Dr Mahathir Mohamad’s wayward conduct and treacherous politics.

Anwar has to do diplomatic acrobatics every time Mahathir makes a major errant move. As one wrong move by Anwar, there will be a repeat of the likes of Sodomy I and Sodomy II, both of which bear the imprints of Mahathir.

That is why the burden to tame the beast now falls heavily on leaders of Pakatan Harapan the likes of Lim Kit Siang and Mohamad Sabu, as well as the collective effort of second-echelon leaders, for which much courage and selflessness is called for.

The best solution is an early transition of power, for which the leaders must pool in their political astuteness and skills to achieve the objective without rocking the boat.

The task is onerous, but the reward is what the reformists have been struggling for all these years - a progressive democracy where everyone is proud to call home.

Fair Play: I suppose after two sodomy convictions and two jail terms courtesy of Mahathir and former PM Najib Abdul Razak, Anwar is wise to their respective game and its style.

Patience is the name of the game for Anwar at the moment. By all reckonings, all the cards are stacked against Mahathir, which is good for the nation, I suppose.

Headhunter: Former PKR deputy president Syed Husin is absolutely right. We didn't quite figure out why Anwar was so subdued, but it's clear now that he fears stepping on the old man's toe.

The repercussion could be brutal as shown in past history. If PKR deputy president Azmin Ali wasn't caught in the alleged sex video, Anwar might never have a chance.

Anonymous_6939cb47: If Anwar can’t even stand up to Mahathir, then he really is not qualified to be the next PM.

The Wakandan: @Anonymous_6939cb47, this is a misnomer. Anwar is not the PM, Mahathir is.

Why don't you say that Mahathir should be an honest gentleman and do the necessary? Help facilitate the handing over of the PM-ship and create an atmosphere of confidence and stability in the government.

Now, it's more like Mahathir needs to be pushed from the pedestal as the sign shows that he wants to hang on indefinitely.

Syed Husin is an old hand in the Pakatan Rakyat coalition. He is the voice of our conscience. It is good that he speaks up. Being a veteran leader, he has respect from the people.

Obviously, something is not right at the moment and Mahathir’s leadership is the cause. The old Mahathir has started to emerge and from what Syed Husin told us, it is quite scary. We do not want a dictator again where cabinet members are dead scared of the PM.

Now that Syed Husin has spoken, would DAP leader Kit Siang be next? And then Amanah leader Mat Sabu and perhaps even Bersatu president Muhyiddin Yassin?

Multi Racial: I do not know whether Anwar will do well for Malaysia. We shall deal with it when the time comes. But Malaysians know we owe to Anwar for his two decades of reformasi struggle and if not because of him, GE14 would not be possible.

Mahathir and his Bersatu joined Harapan at the eleventh hour and his contribution is nowhere close to Anwar’s. Malaysians are aware of the damages done by Dr M during his 20-years rule. In spite of that, Malaysians is willing to accept Dr M as prime minister for two years because it was agreed before GE14.

We also consider his age - then at 93 years - and we hope perhaps at that age he may have repented and may want to right all the wrongs he did. We were wrong.

It looks like the leopard never shed its spots. It also seems he never intended to keep his promise and want to overstay his welcome.

Gerard Lourdesamy: Syed Husin is the epitome of an academic. Not only is he wise, well-read and an intellectual of the highest order but most importantly, a man of integrity.

He deserves to be the education minister or at least the vice-chancellor of a premier university in the country. It is unfortunate that the Harapan government has not given him due recognition.

When he speaks, he speaks the truth because he does not have any political or financial ambitions or self-interest. In fact, he deserves to be named as a professor emeritus of Universiti Malaya (UM) or a royal professor by the Conference of Rulers.

But it will not happen while Mahathir is still alive because for Mahathir, only cronies and sycophantic supporters who think like him matter.

The fact that Syed Husin has done extensive research and written books about the problems faced by the Malays and his left-wing sympathies makes him the ideal person to advice the government on important policy issues like the eradication of poverty, improving the standards of living and education of the B40 (bottom 40 percent) group and reducing the intra and inter-ethnic income disparity in the country.

Tembikai: Syed Husin, you have been a good teacher to me. You were a very good, caring, wise and knowledgeable educator. Until today, you still are.

It is a pity that the rakyat do not know you well and did not give you the recognition that you deserve.

Fortis Est Veritas: Some decades ago, Syed Husin came to Petaling Jaya accompanied by his mother to speak at a ceramah. He spoke after Anwar had made his speech. They were then affiliated to different political parties.

I am sure that Syed Husin knows both Anwar and Mahathir like the back of his hand. But I am of the opinion that the aspirant to the PM's Office should launch his Plan B now.

Listening to him speak at the Malay Dignity Congress - as if the non-Malays just arrived a decade ago - I am sure he will never replace the rule by Malay supremacy of the past with new Malaysia.

Rick Teo: Well done, Syed Husin. You spoke for the silent majority. Mahathir should step down and let Anwar take over. He is incapable of realising Harapan’s manifesto.

Ipoh PP: Indeed, sacrifice has to be made. Who among the ministers will stand up and be counted and take this old fox to task?

Position and money as a minister are very enticing and lucrative. However, someone has to bell the cat. Do it for the nation before it’s too late as this man will continue to play the racial game to the hilt to stay in power.

It matters not how strait the gate

How charged with punishments the scroll.

I am the master of my fate

I am the captain of my soul.