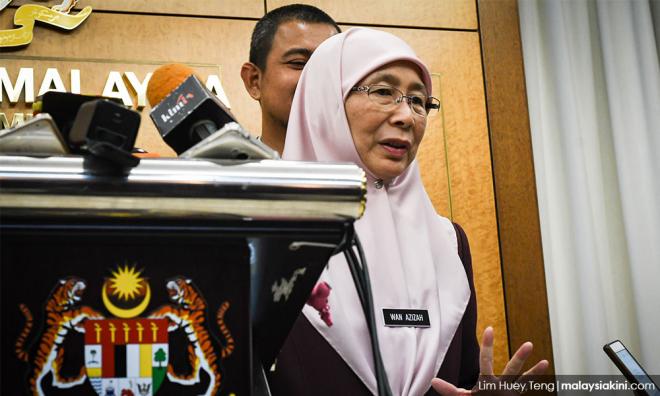 PARLIAMENT | A shortage of social workers is one of the factors contributing to the inefficient management of efforts to address social problems in the country, said Deputy Prime Minister Dr Wan Azizah Wan Ismail.

She said one of the reasons was the current shortage of staff at the Social Welfare Department (JKM).

Citing a study by the Malaysian Administrative Modernisation and Management Planning Unit (Mampu), she said the social worker-population ratio in Malaysia was 1: 8,576 people.

She said JKM staff, already short in number, also haD to carry out tasks outside the scope of their job, hence affecting their efficiency and competence in handling social protection.

She was responding to an original question by Maria Chin Abdullah (Harapan-Petaling Jaya) who wanted to know if the ministry would study the effectiveness of the social protection system under JKM after a UN Special Rapporteur claimed it as being “fragmented’ and with not enough social workers.

Wan Azizah, who is also Women, Family and Community Development Minister, said efforts were being made by the ministry to enable JKM to focus on social work tasks, namely case management of target groups.

Among them is the implementation of the Social Work Profession Act which is expected to be tabled in Parliament in December, she added.

“To address the problem of the shortage of social workers, the ministry has begun discussions with the PSD to resolve the matter, while increasing collaboration with non-governmental organisations (NGOs) in ensuring the target group receives appropriate protection," she said.

Wan Azizah said the cabinet, during a meeting last May, also agreed that the Malaysian Social Protection Council (MySPC), set up in 2016, be reactivated as the main body for the coordination of policies and programmes on social protection.

She said a Technical Committee on Social Protection had been set up under MySPC to coordinate four working committees whereby the Women, Family and Community Development Ministry had been given the mandate to lead the Social Aid Working Committee. - Bernama