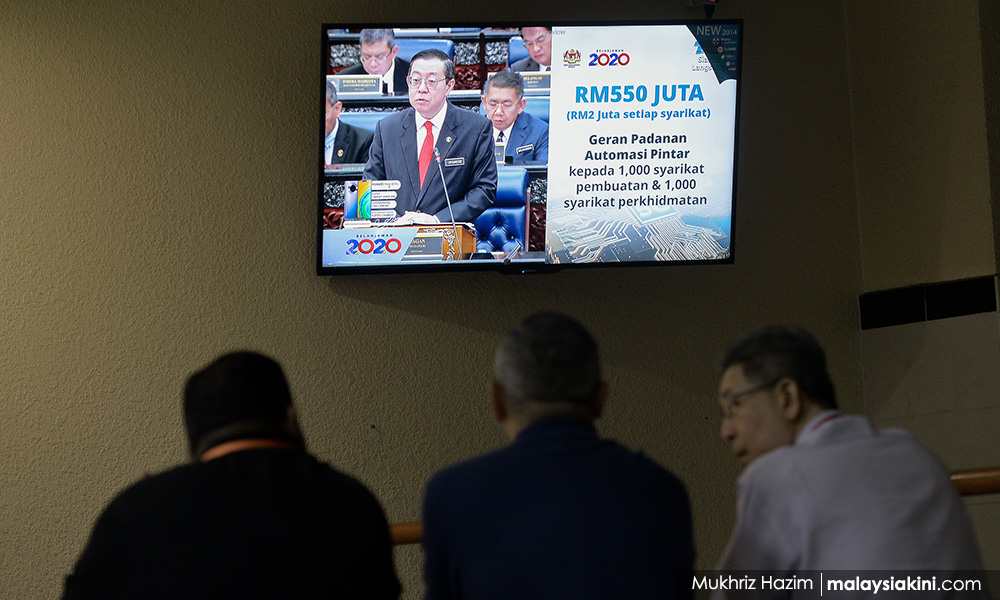 The 2020 Budget is answering the clarion call of youths, as it is aimed at attracting more investments to push the country into the next frontiers of growth, create new jobs with better wages, while being prudent with the nation’s coffer and ensuring wealth is well distributed in the spirit of shared prosperity.

Unveiled by Finance Minister Lim Guan Eng today in Parliament today, the four thrusts anchor the budget themed, “Driving Growth And Equitable Outcomes Towards Share Prosperity” among which is driving economic growth in the new economy and digital era.

The others are, investing in Malaysia: Levelling up human capital, creating a united, inclusive and equitable society and revitalising public institutions and finances.

This is the second budget being tabled by the Pakatan Harapan government since securing the mandate after the 14th General election.

The 2020 Budget allocates a total expenditure of RM297 billion, excluding contingency reserve of RM2 billion, which is an increase of RM19.5 billion compared to RM277.5 billion in 2019, excluding the one-off allocation for outstanding GST and income tax refunds.

The Malaysian economy is expected to remain resilient going forward with 4.7 percent growth this year and 4.8 percent in 2020, while inflation is expected to be well anchored at two percent.

Among others, the budget also makes available RM1 billion in customised packaged investment incentives annually over five years to transform Malaysia’s best and most promising businesses into the most competitive enterprises in the global export market.

The government will also provide tax incentives to further promote high-value-added activities in the electrical and electronics industries to transition into the 5G Digital Economy and Industrial 4.0.

“The Pakatan Harapan government is committed to continuously improving the business climate in Malaysia.

“One of the key reforms to be implemented is the ease of doing business by reducing the number of steps to register a business,” Lim said.

Given that small and medium enterprises will continue to be the nation’s backbone, the government continues to support up and coming entrepreneurs through the SME Bank.

The bank will unveil two new funds, with the government providing an annual interest subsidy of two percent to reduce borrowing costs.

“For SMEs to remain competitive, they must continuously expand their exports,” Lim said.

The ceiling per company for the Market Development Grant initiative by Malaysia External Trade Development Corporation will be increased to RM300,000 from the current RM200,000 annually.

The budget also sets aside RM10 million to Malaysian Global Innovation and Creativity Centre (MaGIC) to support the growth of social enterprises which help to improve the socio-economy of local communities.

Lim pointed out that the “Buy Made in Malaysia” product campaign will be intensified.

“To support our local medical device industry, the government will introduce an initiative to encourage local producers to upgrade equipment and tools used in public clinics and hospitals, based on a minimum allocation of 30 percent,” he said.

As for public institutions and finance, Lim said the government is committed to paying all borrowings and obligations inherited from the previous regime.

For 2019, the government is paying RM2.4 billion to service the debt interest in 2019 and RM2.7 billion in 2020 for 1Malaysia Development Bhd (1MDB) and SRC International Sdn Bhd.

“We would like to express our utmost appreciation to the people of Malaysia who have generously contributed RM203 million towards Tabung Harapan Malaysia, which has been utilised for the repayments,” he said.

As of July 2019, about RM1.45 billion has been returned by international authorities, including the proceeds from the sale of the mega-yacht Equanimity.

While the macro-level policies and incentives are crucial to attract investment and reinvigorate growth, it must be felt by Malaysians from all walks of life for which the government is geared up to address unemployment, the gender gap in employment and reduce the dependence on low-skilled labour, especially foreigners.

“A country can only be united if our economic development is inclusive, regardless of race, religion, geographical location and background.

“The federal government strives to defend and empower all inclusively and not only one group exclusively,” he added.

Following which, the government has allocated RM10.9 billion for rural development, for among others, to improve water supply, electrification and roads, primarily in Sabah and Sarawak.

“From Perlis to Sabah, let us unite to strive together so that the fruits of our efforts can be shared equitably with care and respect for each other.

“We are entrusted with this new hope as our duty. Let’s strengthen national unity and integration towards building a better life and a brighter future for our children.” Lim said in ending his budget speech.