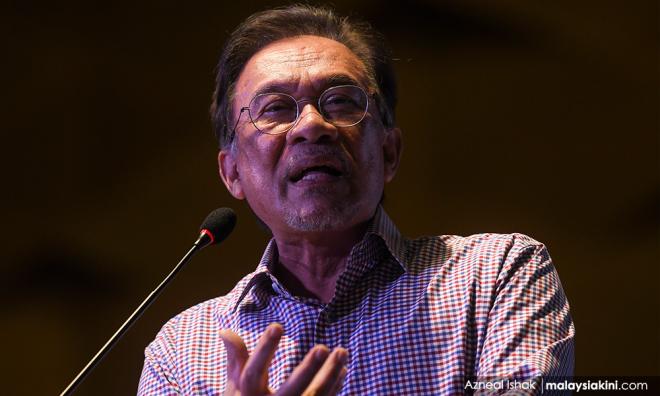 PKR president Anwar Ibrahim recalled his two stints in prison totalling nearly a decade following his convictions in 1999 and 2015.

In his keynote address at an event in Kuala Lumpur today, the 72-year-old politician said he had to endure inhumane and degrading conditions during his incarceration.

According to him, he was served with rotten fish “all the time.”

"Over three-and-a-half years (when imprisoned following a sodomy conviction), beef was served only twice," he was quoted as saying by the Star Online.

As for tea, the PKR leader said it was served without milk and sugar.

However, Anwar said he viewed the experience in a positive light, noting how the diet in prison had kept him slim and free of diabetes.

"And I read thousands of books. I spent time reading, while at the same time had very little food. And I remained healthy. Try staying in prison for a while," he quipped.

Anwar was sentenced to prison in 1999, a year after Dr Mahathir Mohamad, during his first tenure as prime minister, had sacked him as deputy premier.

The PKR leader has maintained that the sodomy and abuse of power charges against him were fabricated by Mahathir and his accomplices, which the government denied.

Anwar, who was initially detained under the now-defunct Internal Security Act (ISA), for leading street protests against Mahathir, was later produced in court with a black eye.

Initially, Mahathir said the injury could have been self-inflicted, but a Royal Commission of Inquiry later found that the then inspector-general of police Rahim Noor had assaulted Anwar.

Recalling this incident in an interview last year, Mahathir said he was furious with the police for not having charged Anwar.

"I was angry at the police because I asked them why have you not put him on trial. At first, they didn't want to tell me. (It was) later only they told me that they have given him a black eye.

"You see, after that, (if) you go to court (with Anwar's black eye) and you know what is going to happen. But I insisted they must go to the court," he had said.

The police chief, who subsequently resigned, has since been appointed by the Mahathir administration as the facilitator for the southern Thailand peace talks, much to the chagrin of Anwar's daughter, Permatang Pauh MP Nurul Izzah.

"I unequivocally oppose this appointment of a brutal assaulter of an innocent man, as he lay there blindfolded and handcuffed – left without medical attention for days.

"This being then lied to the whole world as to the victim’s whereabouts and well-being. Shame on those who executed this travesty," she had said.

Once again, the PKR leader claimed that the charge was false and masterminded by his political rivals.

He was released from prison on May 16 last year after receiving a royal pardon following Pakatan Harapan's victory in the last general election.

Anwar's first stint behind bars came in 1974 when he was arrested during student protests against rural poverty and hunger. He was imprisoned under the ISA and spent 20 months in the Kamunting detention centre.