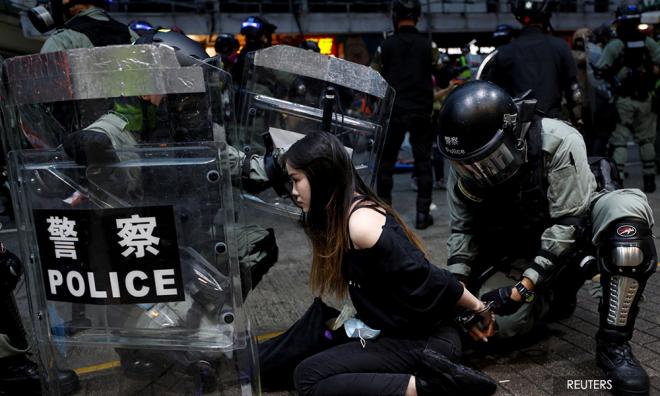 Hong Kong police detained more than 2,200 since start of protests

Hong Kong police have detained more than 2,200 people in 400 anti-government protests that have hit the city since summer, Sputnik news agency quoted Chief Executive Carrie Lam as saying on Wednesday.

Earlier in the day, Lam was due to deliver her annual policy address at the Legislative Council. Opposition lawmakers, however, forced her to abort the speech, shouting protest slogans and urging Lam to resign. As a result, the Hong Kong leader left the hall and addressed the public in a video message.

"Hong Kong has always been one of the safest cities in the world, it has been a civilised, free and pluralistic city without prejudice, where laws were observed. And in just a few months, the areas affected by a social conflict that erupted due to opposition to the adoption of amendments to the extradition law have expanded," Lam said in the video address.

According to Lam, Hong Kong has seen more than 400 demonstrations and marches across the city over the past four months, which increasingly tend to grow into violent protests. This wave, the Hong Kong leader says, has resulted in "over 1,100 people injured and more than 2,200 detained".

"The rioters organised attacks and sabotage; they beat people of different views, spreading chaos and fear in Hong Kong and seriously disrupting people's daily lives. People ask whether Hong Kong will return to normal? Is Hong Kong still a place where one can live peacefully?" she added.

Since early June, Hong Kong has been facing a wave of rallies against the now-withdrawn extradition bill. The protests have since evolved into violent anti-China and anti-police demonstrations.

The tense situation took a new turn earlier in October after the local government banned the wearing of face masks during rallies in a bid to curb violence and make the actions of police more effective. Thousands have since started taking to the streets to protest the new measure, defying the ban.

Beijing views the situation in Hong Kong as a result of foreign interference in China's domestic affairs and fully supports the actions of local authorities, which have stressed that force is only being used against protesters who engage in violent or unlawful behaviour.