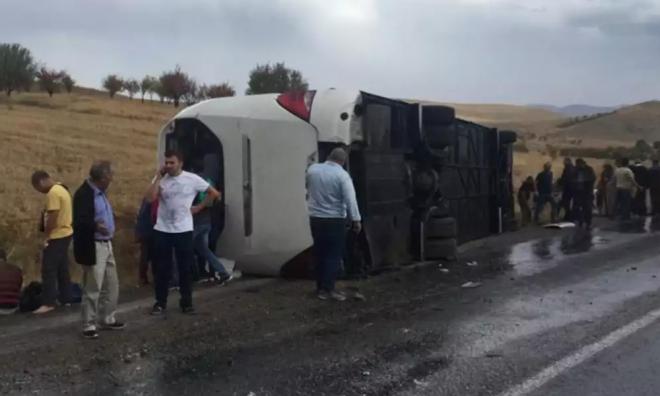 One Malaysian dead, 10 hurt in bus accident in Turkey

A Malaysian was killed and 10 others were hurt after their tour bus was involved in a mishap in Afyonkarahisar, Turkey, yesterday evening.

A Wisma Putra spokesperson, when contacted by Bernama, confirmed the accident involving a bus with 35 Malaysians, which occurred when the bus was travelling from Pamukkale to Cappadocia.

‘’The mishap took place at Afyonkarahisar, causing one death, while 10 more people were injured, including four who were seriously hurt.

‘’The victims are being treated at the Afyonkarahisar Hospital located about 300km from Ankara. The Malaysian Representative Office in Ankara (Malawakil Ankara) is compiling further information from the local authorities on the matter,’’ the spokesperson said.

It was reported that an officer from Malawakil Ankara would be conducting a consular visit as soon as possible to provide appropriate aid.

Meanwhile, the Corporate Communication Division of the Selangor State Development Corporation (PKNS) confirmed in a statement last night that the bus which was involved in the mishap was ferrying 35 of its personnel who were visiting Turkey.

The corporation received a report on the accident from the Malaysian Embassy in Turkey.

‘’PKNS is still waiting for an official statement from the Malaysian Embassy in Turkey, which is gathering the latest information on the incident from the local authorities and the hospital at Afyonkarahisar.

‘’We will divulge the latest developments on the incident from time to time,’’ the PKNS statement said.

Turkey working with Malaysia to stamp out IS terrorist threat
16 Oct 2019
Power shift: Who gains in the battle for Syria's northeast?
16 Oct 2019
A beat-up car and social media storm lead MP to help driver in need
16 Oct 2019
RM80 medical check for e-hailing drivers is CSR initiative by GPs
10 Oct 2019