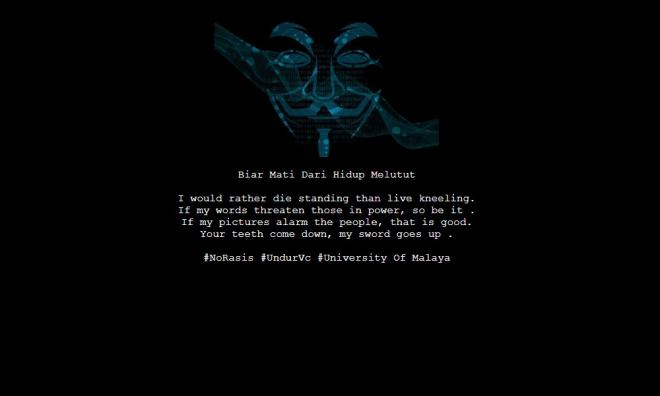 The latest development in the ongoing Universiti Malaya saga has seen the university's online e-pay link being targeted by hackers.

The link, which is at the bottom right of the university’s official website, now leads to a page which is headed by a variation of the Anonymous hackers logo and displays the words:

(Better to die than to live on your knees)

I would rather die standing than live kneeling.

If my words threaten those in power, so be it.

If my pictures alarm the people, that is good.

Your teeth come down, my sword goes up.

This hacking incident follows a protest by engineering student Wong Yan Ke, who staged a protest against the university's vice-chancellor Abdul Rahim Hashim over his alleged racist speech at the Malay Dignity Congress on Oct 6.

He also warned that stern action would be taken if anyone was found threatening public order by touching upon racial or religious sensitivities.

Mazlan confirmed that investigations were being conducted under Section 504 of the Penal Code.