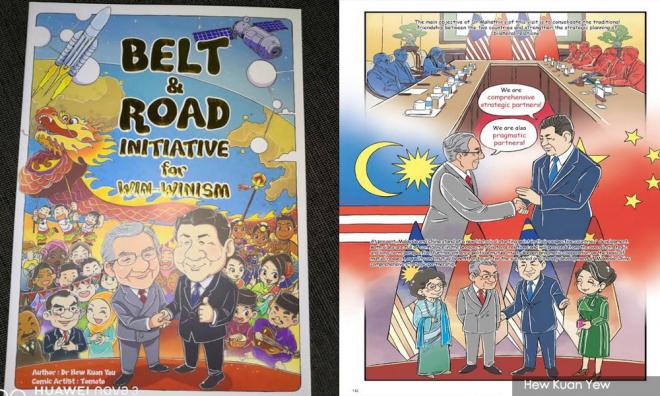 Prime Minister Dr Mahathir Mohamad did not hand a comic book to Chinese president Xi Jinping as an official gift, according to the Prime Minister's Office.

"The PMO wishes to clarify that the book was not an official gift during the meeting (with Xi in April).

"It was (handed to Xi) in a manner that did not observe protocol," said the PMO in a statement late this evening.

The PMO added that the prime minister was never involved in the publication of the comic book nor was he familiar with its content at the time.

"(The prime minister) never agreed to have his likeness used for any purpose nor (did he) approve of the distribution of the comic in schools," said the PMO.

The comic book in question was titled "Belt and Road Initiative (BRI) for Win Winism" and is published by Asia Comics and Cultural Museum which is supported by the Penang state government.

The book was authored by Hew Kuan Yau, who is also the head of the museum and the Malaysia-China Business Council.

Although the book has been long in circulation, controversy erupted after former prime minister Najib Abdul Razak publicised attempts to have the book distributed to schools.

Najib had alleged that the book contained pro-DAP propaganda while demonising him. Hew had argued that this was not true and that the book was meant to explain the Belt and Road initiative.

Meanwhile, Home Minister Muhyiddin Yassin said there was "something wrong" with the book and his ministry would be questioning the publisher soon.

"Preliminary reports (by my ministry indicate) ada perkara tidak betul (there is something wrong)," he said in Pontian, Johor today, according to Berita Harian.

"I am sure that the comic does not have ministerial approval. If it's Upin dan Ipin, it's okay. But if it is a story about politics, foreign policy or ideology such as communism, then no," he said.