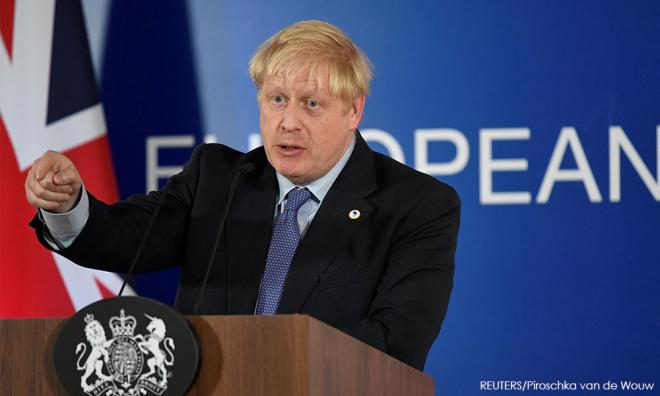 A defiant Boris Johnson said he would not negotiate a further delay to Britain's departure from the EU after the British parliament voted on Saturday to postpone a vote on his Brexit deal.

Parliament voted 322 to 306 in favour of an amendment put forward by Oliver Letwin, a former Conservative cabinet minister.

According to legislation passed earlier, the vote means Johnson is obliged to write to the EU seeking a delay beyond Britain's scheduled departure date of Oct. 31.

But Johnson has repeatedly vowed he will not do this and on Saturday he stuck to that line.

"I will not negotiate a delay with the EU and neither does the law compel me to do so," Johnson told parliament.

"I will tell our friends and colleagues in the EU exactly what I have told everyone else in the last 88 days that I have served as prime minister, that further delay would be bad for this country, bad for the EU and bad for democracy."

The vote however means the government will not hold a vote on its Brexit deal on Saturday as planned. Johnson said he would put it to a vote on Tuesday.

Letwin's amendment proposed that a decision on whether to back a Brexit deal be deferred until all the legislation needed to implement it has been passed through parliament.

Even though Johnson believes this can be achieved by Oct 31, others think it would need a short "technical' delay" in Britain's departure from the EU.

A law passed by Johnson's opponents obliges him to ask the EU for a Brexit delay until Jan. 31, 2020 if he could not secure approval for his deal by the end of Saturday.

"My aim is to ensure that Boris’s deal succeeds," Letwin said earlier. But he wanted "an insurance policy which prevents the UK from crashing out on 31 October by mistake if something goes wrong during the passage of the implementing legislation".

The so-called “Super Saturday” Brexit extravaganza tops a frenetic week which saw Johnson confound his opponents by clinching a new Brexit deal only to find his Northern Irish allies oppose the deal he struck.

In a divided parliament where he has no majority and opponents are plotting maximum political damage ahead of an imminent election, Johnson must now win the support of 320 lawmakers to pass his deal through a booby-trapped legislature.

Downing Street cast the vote as a last chance to get Brexit done with lawmakers facing the option of either approving the deal or propelling the United Kingdom to a disorderly no-deal exit that could divide the West, hurt global growth and trigger violence in Northern Ireland.

“Today we MPs (Members of Parliament) have the chance to free you from the never-ending Brexit saga and move this country forward,” Johnson wrote. “In less than two weeks, on October 31, we would be out of the EU.”

Johnson won the top job by staking his career on getting Brexit done by the latest deadline of Oct 31 after his predecessor, Theresa May, was forced to delay the departure date. Parliament rejected her deal three times, by margins of between 58 and 230 votes earlier this year. - Reuters