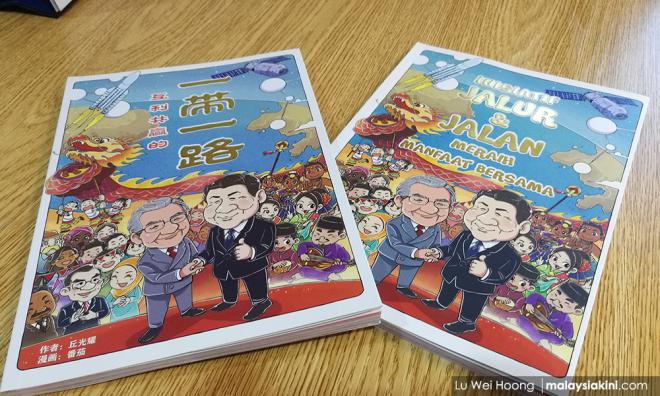 DAP must distance itself from BRI comic - DAP state leader

A state DAP leader has spoken out against distribution of the "Belt and Road Initiative (BRI) for Win Winism" comic in schools, urging the party to similarly take a strong stand against further links to such negative elements.

Johor DAP committee member Mahdzir Ibrahim said the party was already linked to the controversial comic and public's perception was strengthened by a show of support from 43 grassroots members for its author Hew Kuan Yau.

"Therefore, I would like to propose for central DAP to come up with a clear and firm policy in order for such a matter to not be repeated...," said Mahdzir.

He stressed that actions of the small group within DAP has been linked to the party's overall stand and tarnished its image.

"While we respect the rights to freedom of expression, the party must state a clear line so that the creative license is not abused to touch on public sentiments without any benefit to the party and rakyat as a whole," he said.

Mahdzir further reminded that the DAP and its elected representatives as part of the government has a primary duty to champion issues affecting the people.

"The party should not be dragged into the narrow political agendas of certain quarters within it," said Mahdzir.

Although the comic has been long in circulation, controversy erupted after former premier Najib Abdul Razak publicised attempts on having the book distributed in schools.

Najib had alleged that the book contained pro-DAP propaganda while demonising him. Hew, however, had argued that this was not true as the book was meant to explain the BRI.

Hew had also accused Education Minister Maszlee Malik of dancing to Najib's tune, following the latter's statement that the ministry had never approved the comic's distributions in schools.

Four DAP state assemblypersons were among 43 party grassroots who yesterday issued a joint statement to support Hew, promoting Bersatu Youth to issue a call for the DAP to discipline its members.

Meanwhile, Education Minister Maszlee Malik said his instruction for the comic book to be withdrawn from schools, was in accordance with the rule of law.

“We acted based on the rule of law. We need to refer it to the home ministry as printing has its own act,” he was quoted as saying by Free Malaysia Today, alluding to the Printing, Presses and Publications Act 1984.

Maszlee was responding to attacks by DAP grassroots, including five assemblypersons, against him, for the decision.