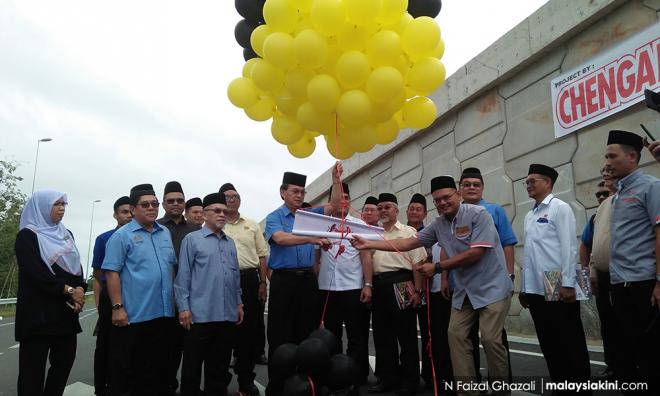 Baru Bian: All planned infrastructure projects in Kelantan will be implemented

The Works Ministry has given its assurance that it will carry out all planned infrastructure development in Kelantan, refuting the allegations that the state has been marginalised.

Minister Baru Bian said there was no question that his ministry has marginalised Kelantan as the wellbeing of people in the state was safeguarded by the huge allocation.

“What has been planned through the ministry, we will continue to implement them especially with regard to infrastructure development for the convenience of the people of the state.

“This is the intention of the Pakatan Harapan government for the development of all,” he told reporters after officiating the opening of the highway construction project from Kota Bharu to Kuala Krai, Kelantan for the 2A package: Kadok to Ketereh, in Kota Bharu today.

He said for 2019, under the 11th Malaysia Plan, a total of RM369 million of the total allocation of RM5.715 billion had been allocated by the federal government under the Works Ministry for infrastructure projects in Kelantan.

If that’s not enough, to ensure the safety and comfort of consumers, the federal government has allocated RM44.4 million this year to maintain 1,366 kilometres (km) of existing federal roads, with RM15.8 million for routine maintenance while another RM28.6 million for scheduled maintenance, he said.

He also said that the 61.4 km new highway project would be completed on schedule and it had been divided into three main packages with priority implementation for the 1B, 2A, 2B, 2C and 3A packages, from Pasir Hor to Bukit Tiu, Machang, costing RM1.45 billion.

“The 1B package of seven km stretch from Pasir Hor to Kadok is ready in August, last year, while the 2A package from Kadok to Ketereh, involves 6.58 km stretch is officially opened today,” he said.

He said the 2B package from Ketereh to Kok Lanas for 6.2 km stretch was still under construction and would be completed by November next year.

Commenting on whether the highway would be connected to Gua Musang, Baru said there was a plan, to see faster travel time between Kuala Lumpur and Kota Bharu.