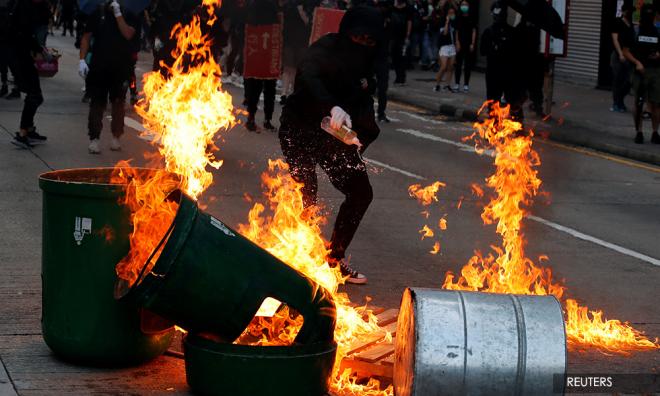 Police and pro-democracy protesters battled on the streets of Hong Kong on Sunday as thousands of people rallied in several districts in defiance of attempts by the authorities to crack down on demonstrators.

After two weeks of relative calm in the five-month-long crisis, the rally drew broad-based support from regular citizens including young families and the elderly.

Banks and other businesses linked to China were attacked and bonfires lit on Nathan Road, a main road running through the heart of the Kowloon peninsula. Police fired volleys of tear gas and baton-charged demonstrators and also hosed them down from water cannon.

The Civil Human Rights Front, which had failed to obtain police approval to hold the march, said about 350,000 people took part. The police gave no estimate, saying they deemed the march to be illegal.

“You can see Hong Kongers won’t easily give up their right to demonstrate. Today’s turnout is more than I expected,” said Daniel Yeung, an unemployed protester who like many others wore a mask in defiance of a ban on wearing them.

“You can see that as long as people keep coming out in large numbers we are safe and can keep fighting,” he said.

Hong Kong, an international financial centre, has been battered by months of huge and often violent protests over fears that Beijing is tightening its grip on the territory, the worst political crisis since colonial ruler Britain handed it back to China in 1997.

On Sunday, massive crowds occupied thoroughfares in several districts in Kowloon and moved northwards, smashing a number of businesses linked to China including banks, a bookshop and other stores.

Bonfires were also set as riot police with shields and batons charged at the crowds, fired multiple volleys of tear gas.

In one incident, a water cannon fired a jet toward the front gate of the Kowloon Mosque where a group of people stood. The mosque is Hong Kong’s most important Islamic place of worship.

Some worshipers interviewed by media outside the mosque afterwards called it a provocation against Islam and demanded the police apologise. Several police officers were filmed entering the building later, though the police gave no immediate response to the incident.

As riot police advanced, protesters retreated readily, with some saying they wanted to avoid large numbers of arrests unlike past rallies when they stood their ground.

Along the march, protesters torched and trashed metro stations and hundreds of shops according to the police, throwing goods onto the streets. Chinese banks including ICBC and the Bank of China were torched and had glass windows smashed up. Smartphone maker Xiaomi also had one shop vandalised.

One trashed shop on Sunday had protest slogans left on its shutters saying it was attacked because it was owned by mainland Chinese mobs who had attacked innocent people.

Police said they had seized more than 40 petrol bombs. An explosive device was also detonated by police that had been rigged among broken bricks in the middle of a street.

The unrest was sparked four months ago by a bill that would have allowed extradition to mainland China for trial in Communist Party-controlled courts. It has since widened into a pro-democracy movement.

The protests pose the biggest popular challenge to Chinese President Xi Jinping since he took power. Beijing has denied eroding Hong Kong’s freedoms and Xi has vowed to crush any attempt to split China.

At the start of the march, banners reading “Free Hong Kong” stretched across the ground. Other posters read “Hong Kongers Resist”, while graffiti on one wall said “Better Dead than Red”.

“The government pretends we just want to destroy the city. We’ll be out for as long as it takes to let the world know it is them who are destroying it,” said a 24-year-old who gave his name as Ray.

Hong Kong is governed under a “one country, two systems” formula, which allows freedoms not granted on the mainland such as a free press and independent judiciary.

Protesters are angry at Hong Kong’s leader Carrie Lam (photo) for what they see as her failure to protect those freedoms from an encroaching Beijing, imposing colonial-era emergency powers, and allowing what they say is excessive force by police.

Lam’s annual policy speech last Wednesday did not address any of the protesters’ demands, which include universal suffrage and an independent inquiry into alleged police brutality against protesters.