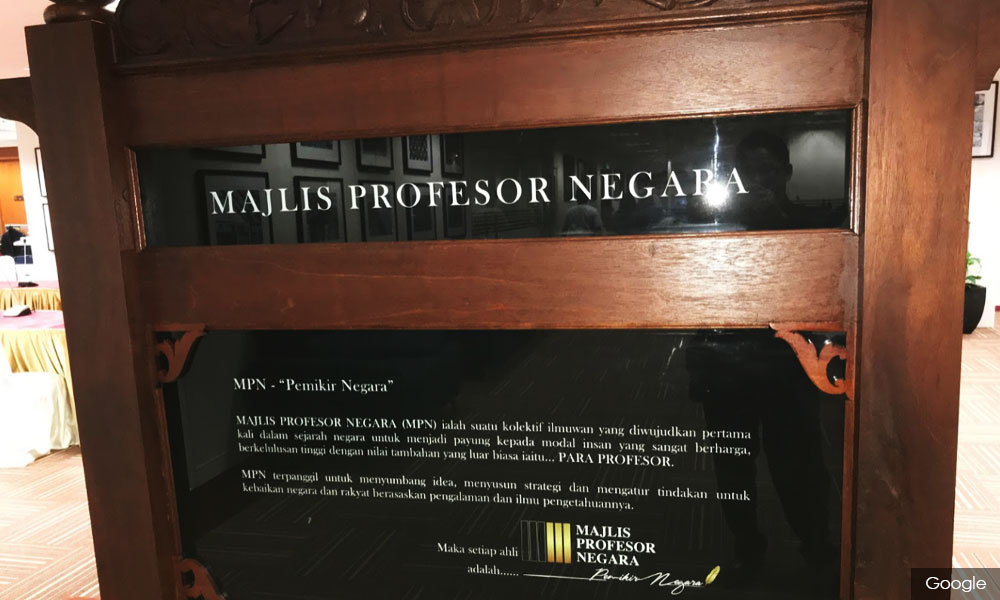 YOURSAY | ‘The MPN has remained a racist enclave – a bastion of Umno’s racist ideology.’

Kim Quek: As a political stooge serving the Umno hegemony, the National Council of Professors (MPN) ought to have been shut down and remain shut under Pakatan Harapan rule.

It was saved from extinction only because of Prime Minister Dr Mahathir Mohamad’s intervention. For what purpose was it allowed to exist? To uphold academic integrity? Far from it.

As you can see now, it has remained a racist enclave – a bastion of Umno’s racist ideology. The difference this time, being that it is serving a different political master.

This hideous body is obviously a pest to Pakatan Harapan and anathema to ‘New Malaysia’. The Harapan coalition should dump it into the dustbin of history forthwith.

Both are performing what former prime minister Najib Abdul Razak’s philosophy was – you scratch my back, l scratch yours. Both need each other.

We expected that after the defeat of the BN government, MPN will rise out of its political clutches and work for the benefit of the students.

That they will start coming up with some new curriculum that will advance the intelligence of the students, but sad to say, they are still there to protect their own interests and their political masters.

Who bothers about the future of the students? If there was even a small percentage of interest, this nation would have reached for the clouds.

It is not that we do not possess bright thinking students, but the problem is that their minds are curtailed by what is taught to them.

Critical thinking is a very dangerous area to bring the students to the knowledge of. The moment they can engage in it, the religious zealots, politicians and even some of the professors become weak at their knees.

Mechi: This is very damaging for MPN. I guess they have nothing to defend, having no principles and only a racist agenda to protect.

How do you expect the Malays to grow and be a force to be reckoned? Malays need role models but these professors are self-serving.

Name one professor, known in the international academic arena. None.

Wake up. Help the Malays; they are left behind because all of you are selfish and refuse to rally behind a new holistic education system. Why?

Slip Sliding Away: Let's face it. MPN is a joke. Real professors have no time for these shenanigans. They are busy doing research and publishing papers or writing books that will make an impact on society in real terms.

Mr Prime Minister, please put a stop to this nonsense.

Annonnymous 080: A convocation is just a ceremony, and not a process to approve one’s degree. Only those whose degrees have been approved are allowed to attend the convocation.

What a sad day for Malaysia if we have such professors.

Keropok Ikan: It’s a bit rich and sad that a professor is talking about denying someone his degree. Surely a professor’s role is to educate and promote knowledge, and not be a batu api (instigator)?

Stand For Truth: MPN must be preserved and allowed to continue to remind Malaysians how low our education standards have fallen that such personalities are called professors.

I sincerely doubt whether these egoistic professors have the capacity to engage in an intellectual dialogue with an assistant professor (of any race and gender) from the National University of Singapore (NUS) in the topic of their choice.

Open Mind: Bravo, former minister Zaid Ibrahim, for the support of the graduate, Wong Yan Ke, who show courage to mount his protest at the right place and timing.

Many may disagree but this is truly the brilliant piece of action that attracts some wide attention.

Frank: If truth be told, the so-called Malay Dignity Congress and what it entails is a testament to the failure of various parties inside the country in doing the right thing over a period of decades.

This is such a complicated matter that this space is not quite the arena to bring them all out into the open - except for one which is concerned with the failure of local universities and its top people and academicians to be independent like what is found in world-class universities from overseas.

A good example, and which is a sad one, is concerned with the issue of the poverty level in the country. It is only when a Westerner (Professor Philip Alston) raised the matter with evidence coming from inside and outside the country that we now hear voices saying the same.

As for our universities' academicians who include some top professors in the concerned field, a question may be raised: what have they been doing? Do they merely toe the line coming from their beloved leaders all these years?

And of course, one can easily detect that hardly anything that those in the universities have done which make a difference to the lives of the people and the country as a whole - after decades of having been around.

Really, my dear Zaid, the universities and their academicians in particular and Malaysia as a whole are neither here nor there - but so many from the highest strata in the society still think that we are really not doing so bad...

Hence, the myriad of problems continues to fester, but until when? As far as I am concerned in case the New Malaysia fails to emerge, we do not have to wait for long to see the end...

Honma: Our beloved Agong has elaborated the importance of unity to achieve progress in Malaysia during His Majesty’s birthday.

And weeks later, four public universities organised the so-called ‘Kongres Maruah Melayu’ where the professors bashed the non-Malays for their own failures, in particular, failing to protect the welfare of the Malays from the corrupted Malay leaders who have stolen their hard-earned money by the billions.

Wira: If education is also about character building, I thank Wong’s parents, teachers and friends for helping build the character that he possesses today.