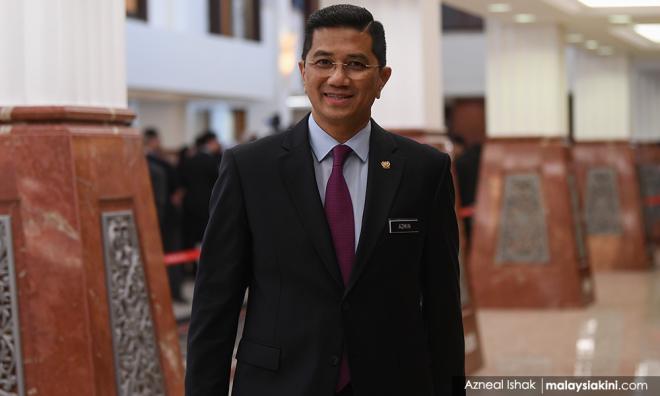 Azmin: Those coming in before term ends are the actual backdoor gov't

PKR deputy president Azmin Ali said those attempting to come in before the current administration ends its term is the actual "backdoor government", and backed Dr Mahathir Mohamad to serve a full term.

He said this when asked to respond to claims he was working with Umno's Sembrong MP Hishammuddin Hussein to form a "backdoor government" that will see DAP and Amanah left out and PKR president Anwar Ibrahim's rise thwarted.

Azmin's (above) position is opposed to Anwar who has indicated he hopes to succeed the Bersatu chairperson after a maximum of two years.

"I see these statements coming from groups that are desperate. As a country that respects democracy, the people decide on the government or prime minister every five years.

"Where do we hold an election to choose the government every two years or one year? So I hope those who are obsessed with power will respect the people's mandate in the general election which decides on the government for five years.

"So quarters that want to reshuffle the government earlier than that - be it two years or one year - that is the actual backdoor government.

"Mahathir should be allowed to remain as prime minister until the end of the term as it is the people's mandate," he told journalists at the Parliament lobby today.

"What was decided by Harapan is only in spirit and an understanding without any fixed timeframe.

"I challenge any individual to tell the public that the agreement set for a near term (transition). There is none. So why is this matter being played up?" he said.

Azmin's statement came exactly a week after he met Anwar for coffee and downplayed a rift between the two men.

He called for a stop to talks about the transition plan, stating that it is not inspiring confidence in the country's economy.

"I hope we stop the discussions about the power transition and focus fully on developing the economy and helping the people."

Anwar and Azmin have had a strained relationship, splitting PKR into two camps.

The situation worsened when Anwar appointed Azmin's defeated rivals into the PKR leadership last December, citing the need to be inclusive.

In June, the emergence of a sex video in which Azmin was implicated had led to speculation that the rift was beyond repair.

Azmin had denied he was the person in the video and claimed that it was part of a nefarious campaign to ruin his political career.

He also insinuated that people linked to Anwar were behind the video while the police later claimed that the leader of a political party was the mastermind behind the circulation of the recording.

However, Anwar denied any involvement in the matter.