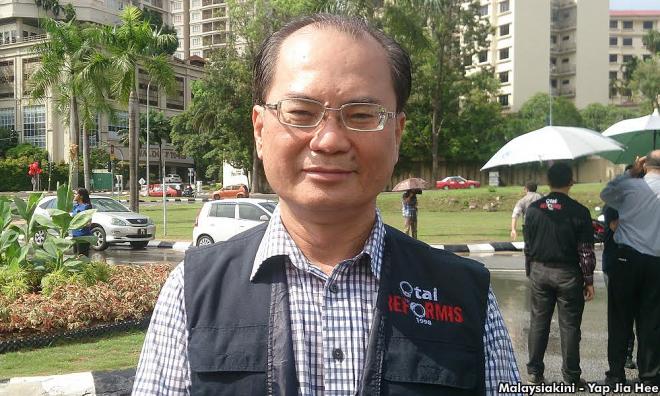 DAP national organising secretary Anthony Loke has referred the party's central committee member Ronnie Liu to its disciplinary committee following the latter's statement for a government to be formed without Bersatu.

In a commentary published by Malaysiakini yesterday, Liu criticised Mahathir's performance and suggested that if the Bersatu chairperson tries to break up Harapan, the remaining parties comprising DAP, PKR, Amanah, Warisan and Upko can still retain the government without Bersatu.

"The statement issued by Ronnie Liu is his personal view. It was an irresponsible statement and one that does not represent the stand of DAP," Loke told reporters at a press conference in Port Klang this morning.

Loke said that in his capacity as DAP National Organising Secretary, he would refer Liu, who is also Sungai Pelek assemblyperson, to the party's disciplinary committee.

"It (Liu's) was a statement that should not have been issued by any DAP leader or any Pakatan Harapan leader.

"Harapan is a coalition of four parties, Bersatu, Amanah, PKR and DAP. We won GE14 on a joint Harapan platform, and we were given a mandate by the people to form a government under the leadership of Dr Mahathir."

"There is no DAP leader who should be questioning Harapan," he said, adding that no leader should talk about any exclusion of any party from the coalition.

"We are committed to Harapan, and we want to take action and send a strong message to Ronnie Liu and everyone else."

"My view is that Harapan consists of PKR, DAP, Amanah and Bersatu.

"Bersatu is playing a very positive role and is an important component in the Harapan government," said Anwar in parliament today.

"I would like to say that Liu's statement may be more personal view, and I do not see it as representing DAP.

"I would like to suggest that the DAP leadership can issue a counter-statement to clarify DAP's standpoint that this is not the opinion of the leader, just the personal view of Ronnie Liu."

"I would like to remind Liu to reflect on his own position without Bersatu as a member of the coalition," Marzuki added.

"Harapan has been successful in achieving some of the people's agendas since the general election victory and this achievement would not have been possible without the full support of all component parties.

"No one person in Harapan may demand the exclusion of any component party," he said in a statement today.

He said that any move to form or persist with a government without any of the component parties in Pakatan Harapan would be unreasonable.

"Each party has its own strengths that bring its own values to the leadership of the nation," said Lee, slamming those who placed their own political interests above the national good.

"We are not yet halfway through the mandate given by the people and there is still a lot of work to clean up the damage caused by the previous regime and to rebuild the country."

Lee, who is also Pasir Pinji assemblyperson, reminded all outside parties not to interfere in the party's internal affairs and that any inter-party disputes should be referred to the top leadership of the Pakatan Harapan Presidential Council.

"All parties need to respect this predetermined mechanism in order for it to perform its functions as best as possible," he said.

In a separate statement, Amanah secretary-general Anuar Tahir urged all Harapan parties to retain its strength derived from a collective decision making process through the presidential council.

"In recent days, the action of some members of Harapan component parties who are openly issuing media statements and trading barbs without going through the proper channels, is disappointing because it risks breaking apart the coalition," said Anuar, who is also deputy works minister.

"By right, all component party members and leaders should understand how it is so easy for a statement to be manipulated to tarnish the image of Harapan and affect support of the people.

"Therefore, all parties in Harapan should focus attention on rebuilding the nation rather than entertaining cheap political propaganda launched by certain parties with intention to break apart our unity," he said.

Anwar: Azmin's 'backdoor transition' is his own personal opinion
23 Oct 2019
Reinventing Malaysia is deconstructing Malaysia
23 Oct 2019
Azmin: Those coming in before term ends are the actual backdoor gov't
22 Oct 2019
Hisham to Harapan leaders: Backdoor gov't? Talk to your PM
21 Oct 2019