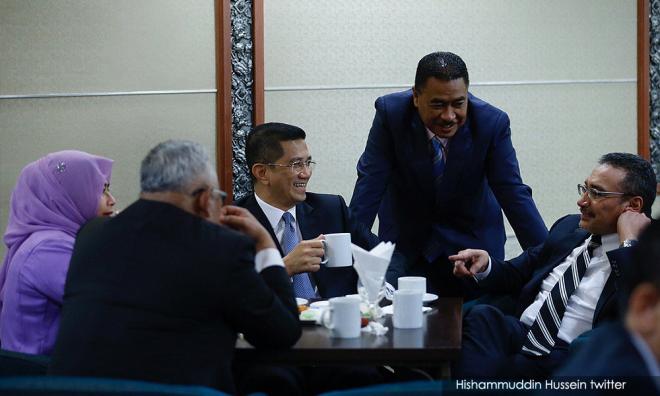 Yoursay: A sinister plot by ‘Gang of Five’?

YOURSAY | ‘If this behind the scene evil scheming is true, it is the greatest betrayal by the Gang of Five…’

Annonymous: If this behind-the-scene evil scheming is true, it is the greatest betrayal by the Gang of Five - Azmin Ali, Hishammuddin Hussein, Hamzah Zainuddin, Redzuan Yusof and Dr Mahathir Mohamad - against the rakyat's strong mandate for the Pakatan Harapan coalition to govern, and not PAS and Umno.

The rakyat and the world are watching this evil scheme unfolding and such undemocratic act to bring down a legitimate government to grab power and hijack the rakyat's historic and victorious event of May 9 via the backdoor.

This is most haram (sinful) and against the wishes of the people and Allah's will.

And such an evil scheme to grab power is a specialist act of a dictator who will certainly destabilise and destroy the country if the racist and corrupt in Umno and PAS illegally regain power and the people who will suffer most are the majority poor Malays who will be enslaved by a racist and corrupt regime using the 2R (racial and religious) card to rule for another 60 years.

There is no smoke without fire and these corrupt power-crazy traitors will reap what they sow. Allah forbids!

Looking On: What a sad scenario for the country. The ‘ketuanans’ (supremacists) can't go further than race and religion.

We are reminded of an ex-chief justice who said that Muslims can do no wrong, and a mufti who said a corrupt Malay is better than a non-Muslim.

Azmin, Hishammuddin and Hamzah - the leading defectors to form a new gargantuan all-Malay government san a GE - and a coy Dr M speaking in riddles, and is seen more and more to be a party to the grand design.

But why oust DAP? They have the best performing ministers in the cabinet. What kind of primitive and barbaric society are we living in?

Something is very wrong with the perpetrators of this totally monstrous plot. This massive frog leap is tantamount to a betrayal of our democracy.

Big Data: This is a crime against the voters by the vested interests, especially those like Hishammuddin who wants to escape from corruption charges, and others pursuing their personal and diverse agendas.

It’s all ventured under the pretext of protecting Malay dignity.

The presence of DAP and Amanah in the present government has been a debilitating force on this treacherous group.

Otak-Otak: It’s clear as crystal, those involved in crimes want to become the government so that they can get away and then able to punish the innocent instead. Is this Mahathir's so-called 'rule of law'?

Look at former premier Najib Abdul Razak and his gang of thieves, who had beem charged such heinous crimes, still left walking free like VVIPs and allowed to continue to create chaos freely on a daily basis, yet they have the cheek to blame others for losing their dignity?

Quo Vadis: As elected leaders reportedly vie for positions and frame new alliances with impunity, where in the equation are the voters who voted them into office?

What a betrayal of trust, callous demeaning of the hopes and aspirations of the people at large. For such betrayal, hellfire would be too good a recompense.

In the last elections, we, the voters, put out to the meadow, leaders who had betrayed us and run the country into the ground. Unfortunately, there is no constitutional provision for recall.

While we wait for the next elections to do likewise yet again, can we in the meanwhile raise our voices, without let, in the media, in the market place, wherever there is space and opportunity to make clear we will not be taken for granted?

The Third Man: All these shenanigans are the nature of weak and dishonourable men who have no backbone but are parasitic opportunists.

Let’s not waste precious space on garbage. If there is such a traitorous act, then they should all be arrested under our security laws.

And as for Mahathir whose time is at its end, he should do the honourable act and come out and state unequivocally that PKR leader Anwar Ibrahim will take over as prime minister in May 2020.

Do they think the voters account for nothing and their lofty positions entitle them to claim that "there is a need for us to rethink to shape the future of Malaysia"?

That message has already been given. Harapan is the government with the mandate to shape the future of Malaysia, so quit the destabilising tricks and guarding of your own little patch of turf.

We're getting sick of this nonsense.

The Analyser: Is there no limit to the devious delusions of a grasping Malaysian politician?

I wonder how many votes they think they will gain with this collection of political lepers. Because they stand for everything the Malaysian voter (of all races) never wants to see again.

Brahman: With Azmin, a totally damaged good, and keris-waving Hishammuddin, touted as the next in line to Mahathir, I don't think the plot will gain much traction.

You throw into the mix flying-car Redzuan and conniving Hamzah as plot planners, I think only desperate and oxygen-starved politicians will join their comical plot of a government with losers in and winners out.

Certainly, Mahathir will not discourage these clowns from plotting. I believe they have his tacit support.

That's why it is imperative that he should be replaced as soon as possible before damage to the nation gets bigger.