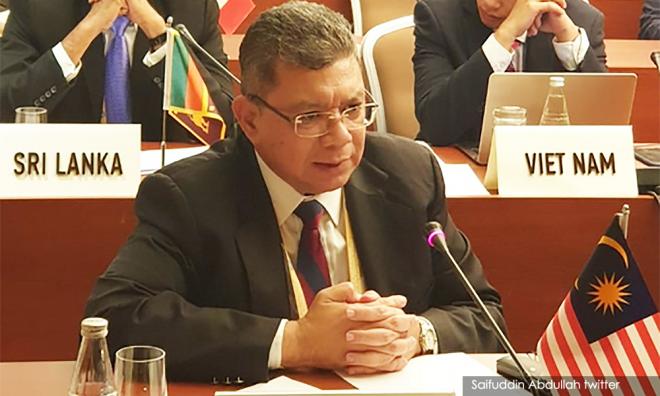 Malaysia, which considers the Non-Aligned Movement (NAM) still relevant in this era, is gradually returning to the movement's founding principles in its foreign policy, Foreign Minister Saifuddin Abdullah said yesterday.

He noted that since Pakatan Harapan took over the government in May last year, it had taken steps to re-adopt 'fundamental’ foreign policies.

“And that is why we have to continue to voice out issues such as the ones concerning the Rohingya people and Palestine.

“As for Yemen, right from the start of the Harapan administration, we have stopped involvement in the Saudi-led coalition there,” he told the Malaysian media covering the 18th NAM Summit in Baku.

Saifuddin was asked whether Malaysia's foreign policies had gone off track from NAM's founding principles to the point there are views that the movement was leaning towards certain selective nations and the intervention of other nations’ affairs, including military deployment.

The NAM has its basic concepts originating from the Asian-African Conference – also known as Bandung Conference – held in Indonesia in 1955, which was the cornerstone for the movement’s formation later, which, among others, fought for respect for sovereignty and territorial integrity of all nations, recognition of the equality among all races and all nations and non-intervention or non-interference into the internal affairs of another country.

Saifuddin said Malaysia was now training its sights on regions it formerly had close ties with, such as Africa and South America.

“Although we may not be having the Langkawi Dialogue, there are many other platforms for us to strengthen ties with these nations.

“In fact, under Prime Minister Dr Mahathir Mohamad's leadership, we are seeing a new (foreign relations) environment that is in line with the nation’s common interests,” he said.

Saifuddin said NAM was an important platform where cooperation involving nations in which Malaysia have strong ties and interests with are concerned.

“This is not just about NAM interests alone, but to preserve bilateral ties as well,” he said.

Saifuddin said the NAM Summit will continue to feature traditional issues such as Palestine and global security concerning the South China Sea and the Rohingya people.

Mahathir will lead the Malaysian delegation at the 18th NAM Summit here beginning Friday where 17 Heads of State and five Prime Ministers are scheduled to attend.