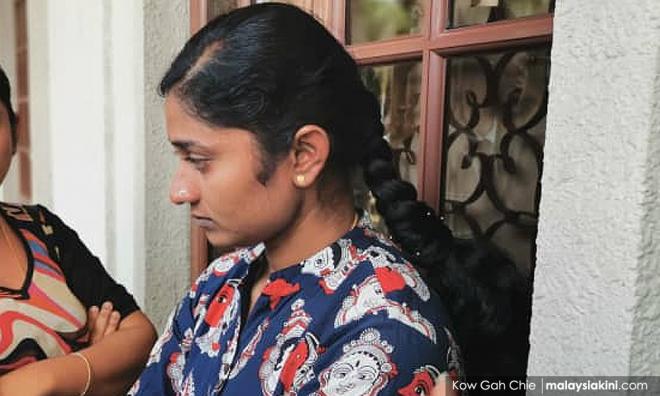 How much longer can I lie to my kids, rues detained exco's wife

Two weeks have passed since Malacca exco G Saminathan was detained for his alleged links with the Liberation Tigers of Tamil Eelam (LTTE).

His wife, Umar Devi (above), and the wives of others held under the Security Offences (Special Measures) Act (Sosma) dragnet are hoping their husbands would be released before Deepavali this weekend.

"We've been told that the police could arrange a meet up for us on Monday in conjunction with the holidays. But that's just going to be around 30 minutes.

"How much longer can I lie to my own children, telling them that their father is away on a business trip.

"Sooner or later they will ask me why is he still not back," Umar Devi told the Star Online.

She together with the wives of S Chandru and V Suresh Kumar have been staging sit-ins in front of the Bukit Aman police headquarters in Kuala Lumpur.

Various quarters have asked the police to charge the suspects in court instead of holding them under Sosma, which provides for detention without trial for a period of 28 days.

Police detained a dozen suspects in total, including DAP assemblyperson P Gunasekaran, over alleged attempts to revive the LTTE, which was decimated in 2009, bringing an end to the protracted civil war in Sri Lanka.

According to the counter-terrorism division, one of the suspects had plotted an attack on the Sri Lankan High Commission in Kuala Lumpur.

Meanwhile, the women, when quizzed on the reasons for their sit-ins, said they could not bear staying at home without hearing any news of their loved ones.

"If there is an offence committed, please just bring them to court. Charge them and let their lawyers proceed.

"We have cooperated with the police since day one. This is akin to having the punishment before the verdict," said Umar Devi.

"The police say the investigation will begin next week. They will not be released before Deepavali," said a visibly distraught Umar Devi.

"We don't know any other way. We will only stop our hunger strike after our husbands are released. We are not ready to meet anyone including ministers," she added.

"After my husband was arrested, I met many people asking (for help) but they refused to see me. Those who came to our house could do nothing but share their sympathy.

"Where are our ministers? Where's the Tamil community?" she cried.

"(Suddenly they) make no noise, but what happened to us today where we have to sit in the street, do you have any guarantees that might not apply to you tomorrow?

"My husband was in the state government serving the people. I am a voter and voted to change the government, now we are sitting here in a hunger strike for our husbands' freedom."

DAP 'could do more'

S Arutchelvan, deputy chairperson of Parti Sosialis Malaysia (PSM) was scathing about DAP's lack of support for their jailed members.

"I am totally angered why DAP cannot even do a decent campaign or have a support system for a family member of their elected representatives getting arrested under Sosma.

"Nowadays, DAP is sitting in so many important positions and GLCs (government-linked companies), it is pathetic that they cannot do anything to help their own members," he told Malaysiakini.

Arutchelvan added that when PSM members were arrested under the Emergency Ordinance in 2011, the entire PSM leadership and machinery played a critical role in securing their release.

“I pity the wife. It is sad to see. I believe DAP can do more than just providing legal assistance."

Previously, Prime Minister Dr Mahathir Mohamad had defended the Sosma crackdown and said that he was satisfied with the police's action after being briefed on the matter.

Yesterday, Inspector-General of Police Abdul Hamid Bador assured the families of the 12 that the detainees are well taken care of and appealed for their patience.

"I sympathise with them especially with Deepavali around the corner but the arrests were made for the sake of national security.

"I understand they are dissatisfied but please be patient. They have my assurance that the detainees are well cared for and their families have every right to visit them under the law,” he said.

Five of the detainees have since filed habeas corpus applications to challenge their detention.