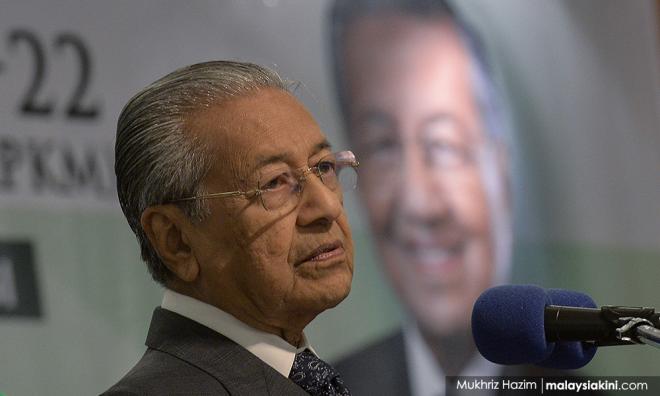 However, he did not elaborate on this in a blog posting in which he expressed disappointment with the accusations of racism levelled against the Malay Dignity Congress.

“When the former colonies of the European nations gained independence, many discriminated against the non-indigenous people. Some had to leave the country. Some were violently attacked.

“It hurts me to think in their own country the indigenous people are not supposed to have their own gatherings without being accused of being racist.

“And now of course, I will be labelled a racist for writing this,” he added.

During the Malay Dignity Congress earlier this month, Mahathir had courted criticism for stating that the Malays had accepted outsiders as citizens in exchange for independence from the British.

At the time of Malaya's independence in August 1957, conditions of citizenship of the Federation of Malaya fell into separate categories of automatic citizenship and citizenship by naturalisation.

'As usual, there were extreme views but ...'

In his blog post this afternoon, Mahathir said he attended the congress because he was a Malay.

“It is common in this multiracial country for the citizens to retain their identification with their countries of origin even after being in Malaysia and holding its citizenship for three generations. They do not want to lose their racial identities.

“They manifest this ethnic link through their language, culture, schools and ethnic organisations. They often hold meetings confined to their ethnic group. Sometimes I would be invited to open these meetings and asked to give keynote speeches,” he added.

In multiracial Malaysia, Mahathir said, ethnicity is recognised as legitimate and proper whereas other multiracial nations witnessed the non-indigenous people identifying themselves with the indigenous citizens almost completely.

“They adopt the language and culture of the indigenous people and break their link with their countries of origin. They even change their names.

“It is a measure of the tolerance of the indigenous people in Malaysia that gatherings which are confined to the different ethnic groups are accepted as normal,” he added.

Therefore, Mahathir said he was surprised when advised not to attend the Malay congress, which was jointly organised by four public universities, to discuss the race's dignity.

“Obviously they are concerned over their possible loss of dignity, whatever that might mean. As usual there were extreme views but on the whole, they were balanced.

“And now there is even a demand that the Malay initiator of the gathering should be sacked for attending,” he added.