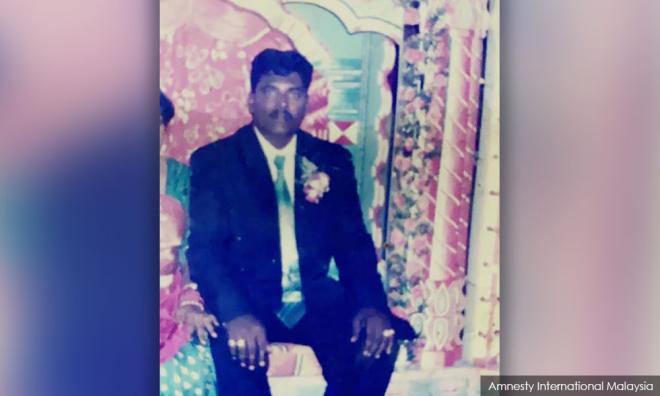 Festival of Lights remains dim for some

COMMENT | This will be the 15th Deepavali that the family of Mainthan Arumugam is celebrating without him.

Once again, the 49-year-old will not be there to wake his children in the morning, give them the traditional oil bath, join them for prayer and share happiness and love at a time meant to be spent with family and friends.

Instead, Mainthan now sits in solitary confinement, where he is allowed out for an hour a day.

His wife, Gunalakshmi Karupaya, is a single mother struggling to raise four teenagers with an income of just RM1,000 – with all of them living in cramped dilapidated house in Kuala Lumpur. Fifteen years raising a family without a husband who may well be a victim of flawed justice.

Mainthan might face each day alone, but he is not the only one. He is among 1,294 death row prisoners in Malaysia, a case highlighted in our recently published report, “Fatally Flawed: Why Malaysia Must Abolish the Death Penalty”.

Among the various issues underscored in the report, a key concern is access to fair trials, including restrictions on access to competent and effective legal counsel, delays in notification of arrest, the lack of legal representation, ill-treatment, torture and abuse in detention, and forced confessions.

There is also an unreasonably high threshold before a concluded case can be reviewed, despite the fact that new evidence has come to light, as it did in Mainthan’s case. “Fatally Flawed” also looks at the people who are on death row and finds that most come from disadvantaged socio-economic backgrounds. Certain ethnic minorities are also overrepresented on death row.

Mainthan’s case is such a sad and strange case and raises some serious questions about our criminal justice system.

They stated at trial and on appeal that they had been beating another man on the night in question, whom they thought had stolen items from the shop owned by Mainthan.

This man was subsequently taken to hospital and treated, but later could not be traced to come forward as a witness for the defence.

The trial judge doubted the existence of this man and dismissed this defence as an “afterthought”, since it was not raised when the prosecution produced its evidence in the first part of the trial. The appeal courts concurred.

He signed a statutory declaration to support the reopening of the case, detailed how he had moved to another state and he feared for his safety when he was asked to appear in court, since he did not understand the nature of the judicial proceedings. However, the Federal Court has rejected application for the review of the case.

This case reeks of multiple inconsistences. An innocent man could very well be living in a cell for 15 years through no fault of his own. A terrifying thought, quickly followed by another: Is he the only one?

Too many incidents reveal that there are some serious concerns with the justice system: restrictions on access to competent and effective legal counsel, delays in notification of arrest, the lack of legal representation, ill-treatment, torture and abuse in detention, forced confessions, and a lack of procedure to reopen concluded cases although new evidence has come to light.

I often wonder, of the 469 people that Malaysia has hanged in the name of justice since 1957, how many were innocent?

Luckily, the Malaysian government is observing a moratorium on executions, and Mainthan, along with other death row inmates, will not hang.

Still, there are some serious, pressing issues with the criminal justice system that the Malaysian government must answer for. Flaws must be tackled.

Amnesty International has made a total of 27 recommendations in “Fatally Flawed” to the Malaysian government, the inspector-general of police, the judiciary, the state Pardons Boards, the Parliament and to the international community.

We urge that these recommendations be considered and addressed. Almost every week, someone is being sentenced to death. There are lives at stake.

As kuttuvilukku are lit in the homes of Hindus, as Malaysians celebrate the Festival of Lights and as we enjoy a public holiday on Monday, do let us remember the ones often forgotten.