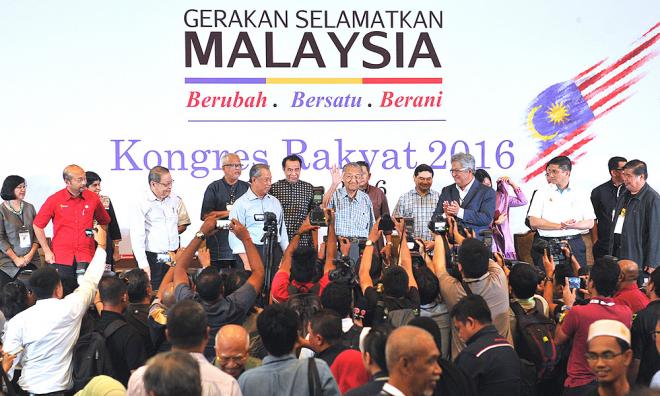 Roti in Milo: The politics of Malaysia

COMMENT | M is for Malaysia. One columnist affirmed let M, the documentary, not be a "Mistake". When 83 percent of Malaysians turned up to vote on May 9 2018, the popular will of the people was M&A.

In corporate language, M&A would be "Mergers and Acquisition”, sometimes with the goal to strip the acquired corporate entity bare to increase the value of the new owner's stock and its shareholders. Everyone gets a dividend, and the CEO gets a pay bump and a bonus too.

But this form of M&A is terrible to the plight of the workers, especially when practised on Malaysia. Pakatan Harapan believed in M&A - precisely because the kleptocracy of then Prime Minister Najib Abdul Razak was indeed triggering a rot in the country. Malaysia, for the lack of a better word, was becoming worse than Zimbabwe led by the late president Robert Mugabe.

M should not be the politics and dietary habit of Milo, the practice of many Malaysians every morning without fail, of dipping their roti (bread) into the warm but sweet cup of drink.

Not only will the roti become soggy, but the sugary intake that goes into the drink will destroy the health of the consumer over the medium and long term.

Pakatan Harapan was not stirred and shaken into a coalition of various parties to be Milo. M = Malaysia = My country = My home = My birthplace = My very peace of mind, period.

M, rightly or wrongly, has become the "murmurs" of the people. If this state of affairs is allowed to persist, M would make Malaysia a calcified cup of Milo, which is useless too.

When Harapan was formed prior to the 14th general election, it specialised in "listening to the people".

When asked by legions of journalists, as far back as 2016, as to why Dr Mahathir Mohamad, was returning to politics, his answer was cryptic: "Many showed up at my home or office in Perdana Leadership Foundation and spoke of the errors and corrosive effects of corruption."

I must admit I was one of them who met Mahathir at his home way before even the Deklarasi Rakyat (Citizens' Declaration).

After explaining descriptively what is plaguing the nation then, especially the kleptocracy and the impact on the people and the nation, I suggested four things:

Credit to Mahathir, he listened attentively as always, and I was called subsequently to the first technical committee for the Deklarasi Rakyat. The rest is history.

M&A, as some would like to say, can lead to Minister of Economic Affairs Azmin Ali (photo) becoming the next prime minister. But then if this is the case, it would have destroyed the transition promised to the people.

Malaysians did not wake up in large droves to support Azmin then. Not forgetting Azmin, who preferred Pakatan Rakyat to the birth of Harapan, was against the nomination of Mahathir as Harapan chairperson and eventually as the Harapan prime minister candidate.

Things have changed these days. One must also not forget how Dr Wan Azizah Wan Ismail stood by Harapan's promise and commitment to ensure Mahathir was made prime minister although the then King offered her the position post-GE14 election results due to PKR securing the highest number of parliamentary seats, even beyond DAP, Amanah and Bersatu.

Harapan should operate like what the old RTM drama called "Empat Sekawan" (four friends). It was a drama based on a group of Chinese speaking in various dialects way back in the 1970s. Yet the drama struck a chord among Malaysians as the "four friends".

When a drink is too sweet, and the sugary content is delivered into our body, without fail it enters into our bloodstream as glucose. But too much of anything is bad. The 'politics of Milo' - of trying to brew Harapan into something which it is not - should cease and desist. M&A is based on a written transition. Not one but two.

Any attempts to dilute the strength of Harapan by 2023 will lead to its collapse by then. M is not for money or to those with a special vested interest - one should remember too.

M is for a triumphant Malaysia from now and beyond. M, interestingly, could also be for Muhyiddin Yassin, the one who kept urging all sides to remain calm, and patience, to allow the promised transition to each forward.

M is for promised, front-ward motion and not backtracking. Muhyiddin as always has been the unifying factor of Harapan with his wisdom, without much pomp and grandeur, always refocusing the coalition to work to deliver what all Malaysian want.