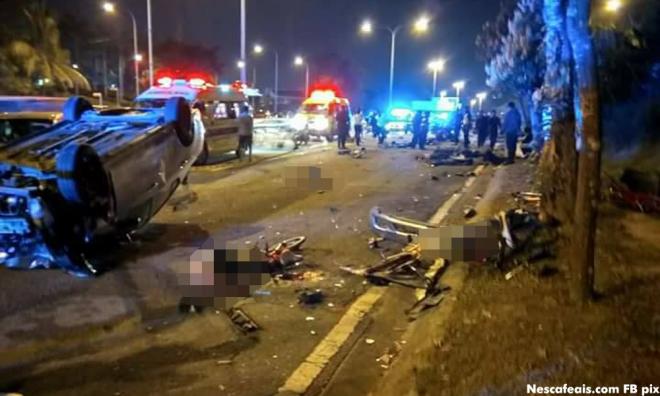 The Magistrate's Court in Johor Bahru has freed a woman from a charge of reckless driving which caused the death of eight teenage cyclists in 2017.

Bernama reported Magistrate Siti Hajar Ali as releasing Sam Ke Ting, 24, without having her called to the stand after finding the prosecution had failed to prove a prima facie case.

In her judgment, Siti Hajar said the court took into consideration several factors namely that it was a dark, hilly and winding road where the driver could not foresee that there would be a bicycle gang on the road at three o'clock in the morning.

The magistrate added that the bicycle gang had put themselves in danger.

"Based on the testimony of investigators, there is a big tree on that road and the lights were dim even though there were lights on the road divider.

"The activity (joyriding bicycles) was known to the locals, there were complaints of bicycle races there.

"It is reasonable for those to pass by there to expect the situation to happen, however, this only applies to residents there and those who frequent the road. It is not fair to motorists who use that road infrequently or do not live there," she said.

Siti Hajar added that investigations found that Sam was not under the influence of alcohol, was not using her phone, and wore a seatbelt while driving, proving that the accused was driving responsibly and carefully.

The magistrate reminded parents to look after their children so that such incidents don't happen again. She also urged police to take action against such activities.

Sam had pleaded not guilty when she was charged with reckless driving in 2017.

Forty-six witnesses testified in the case, and 214 exhibits were presented in court.

Eight others were seriously injured in the incident.

Johor's Sultan Ibrahim Sultan Iskandar had at the time said the incident should serve as a lesson to parents to monitor their children and not allow them to play in dangerous areas.