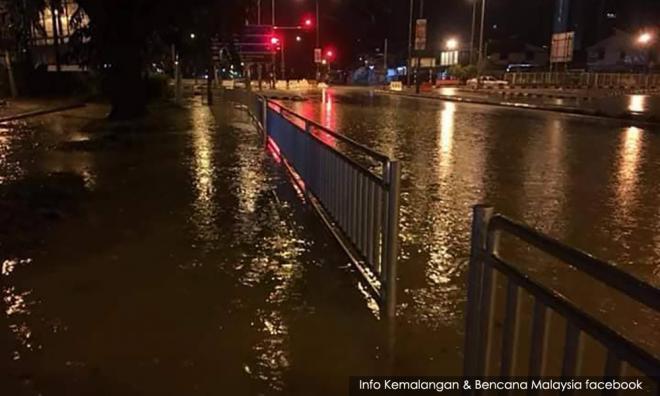 More than RM0.5b worth of flood mitigation projects for Penang

ADUN SPEAKS | In the last two weeks, Penang has been inundated with flash floods as the annual inter-monsoon period brought an exceptionally high intensity of rainfall. For example, data at our rain gauge stations recorded 100 – 200mm of rain per hour in areas that have been the hardest hit.

To put things into perspective, 60mm of rain per hour is already considered to be heavy rain and is usually enough to cause flash floods.

The high intensity of rain was also coupled by the super tide phenomenon which occurred over the Deepavali weekend. Being a coastal state, heavy rain and high tide is a formula that will inevitably result in floods as stormwaters are unable to discharge into the sea.

Another natural phenomenon that cannot be denied is climate change, which is the reason for the unusually high intensity of rain in recent years.

Statistically, annual rainfall per hour in Penang has risen six times since the 1990s, from an average of 31mm to 180mm in recent years.

Clearly, the capacity of the existing drainage infrastructure in Penang is unable to cope with such an increase in rain intensity. For this reason, the state government has invested in detailed studies in the form of Drainage Master Plans for all five districts in Penang.

These master plans, which also adopt the Department of Irrigation and Drainage’s Urban Stormwater Management Manual's sustainability guidelines, are now used as the official reference for planning and development in each district.

In order to deal with increasing rain intensity, the Penang government has also invested enormous amounts of money on flood mitigation infrastructure. From 2013, 369 projects worth RM155 million have been implemented throughout the entire state.

These funds are derived from the Drainage Contribution Fund, a mandatory charge that is imposed on property developments. Meanwhile, the Penang Island City Council has spent nearly RM43 million on 37 flood mitigation projects in the same period of time.

On top of that, another RM150 million for eight high-impact projects were approved by the state government following the November 2017 floods. Out of these eight projects, six are already under construction while two more are being tendered for, following the completion of their detailed designs this year.

While these high-impact projects are designed to mitigate floods in many critical areas, they can only function after their completion, most of which are scheduled for next year.

In addition to the state projects, the federal government has, since 2018, approved five projects worth approximately RM200 million, including the long-awaited Sungai Pinang flood mitigation scheme. It is expected that even more projects will be approved soon. Prior to 2018, Penang hardly received federal funding for flood mitigation projects.

In total, adding together all the state and federal government projects, around RM550 million has been allocated for flood mitigation infrastructure in Penang since 2013.

Unfortunately, voices from the opposition have lately accused the Penang government of not doing anything to alleviate the flooding problem in Penang. Some have even deemed our flood mitigation projects a “failure”.

It is extremely hypocritical for these parties to make such baseless claims as they were all part of the BN government, which denied Penang many critical flood mitigation projects while they were in power at the federal level.

The best example is the Sungai Pinang flood mitigation scheme which involves the most important river catchment area with the highest population density on Penang island.

After the initial phase of the project was completed in the mid-90s, funds were never disbursed for the subsequent phases and consequently, no work had been carried out.

After the change of the federal government in 2018, I personally made a courtesy visit to Finance Minister Lim Guan Eng, who immediately approved the RM150 million needed for the next phase of the Sungai Pinang flood mitigation project.

A tender was then carried out to appoint a consultant, and the project is now in the detailed design stage, with construction due to start in late 2020 or early 2021.

Unlike the opposition, who are akin to the Malay saying of "ludah ke langit terkena muka sendiri", the Pakatan Harapan state and federal governments are not interested to point fingers but are instead committed to solving flood mitigation problems in Penang.

This commitment is clearly evident in the RM550 million worth of flood mitigation projects implemented in the state since 2013.