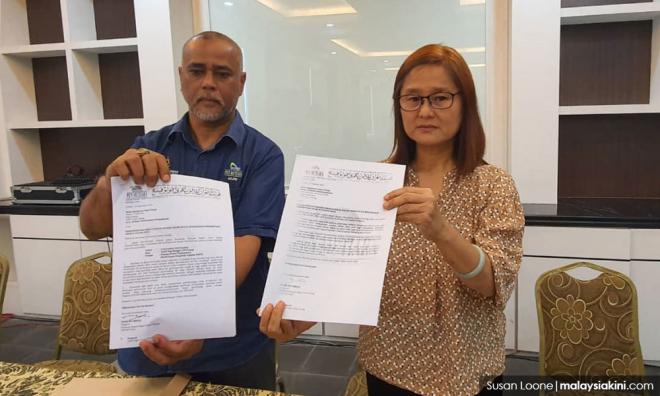 Fisherfolk miffed by MBPP's 'no' for Esplanade solidarity event

Fisherfolk groups and NGOs have expressed disappointment that the Penang Island City Council (MBPP) has rejected their application to hold a rally at George Town's Esplanade.

Penang Fishermen's Association chairperson Nazri Ahmad (above) said the move to reject their application amounted to "sabotage", claiming there appeared to be an intention to prevent their gathering.

The groups - under the "Penang Rejects Reclamation" banner - want to use the field on Nov 4, from 10 am to 2 pm, to hold a solidarity event with fishermen affected by the Penang South Reclamation (PSR) project.

On the same day, the fishermen plan a one-day boycott to raise awareness of their plight in the wake of the 1,820ha reclamation project which involves the creation of three artificial islands at the south of Penang island.

"We sent a letter to MBPP seeking to use the public field for a rally on Nov 4 but unfortunately received we received a reply dated Oct 25 telling us that maintenance work was being done in the area that week," Nazri said.

"We visited the area but did not see any work starting in the area yet. We applied early to avoid any problems and we have also informed the police and have told them the event is peaceful and is meant to defend the livelihoods of the fishermen," Nazri said.

He was responding to a letter sent by MBPP social services director Rashidah Jalaludin saying the council "cannot consider" the fisherfolks' request to use the field on Nov 4 as maintenance and restoration work would be carried out in the area then.

"We apologise for the matter. Any inconvenience caused is much regretted," Rashidah added.

Nazri said he responded to the letter today with an appeal urging MBPP to reconsider their decision as massive preparations had been made to make the event a success and relocating to another place would be "difficult".

He said the group chose a recreational area like the Esplanade and not Komtar as they do not want to disturb office-workers.

Event to go on

Nazri said that during the time of the previous BN government, the method to prevent people's gatherings was similar to the one practised by Pakatan Harapan now.

"We were hoping that this new government would be different. We are disappointed that their method and attitude which goes against the rakyat's aspirations," Nazri said.

"We are not going to speak about sensitive issues but about the reclamation project and how it affects our livelihoods," he added.

Despite the council's rejection, Nazri said the event would still go on at the Speakers' Corner at the Esplanade.

He added a memorandum urging the state government to reconsider the reclamation project would also be sent to either Chief Minister Chow Kon Yeow or state assembly speaker Law Choo Kiang on Nov 4 between 10 and  10.45 am.

She said 50 university students from Kuala Lumpur would be attending the event to interview the fishermen and "bring their stories back to KL to share it with the public there".

"We have gone to KL to invite friends since last week and we received support and donations from several NGOs and individuals including former Bersih chairperson S Ambiga, MyPJ and Center to Combat Corruption and Cronyism (C4)," she added.

"The MBPP has given us a lame excuse to prevent us from holding our event at the public field (Esplanade)," Salma said.