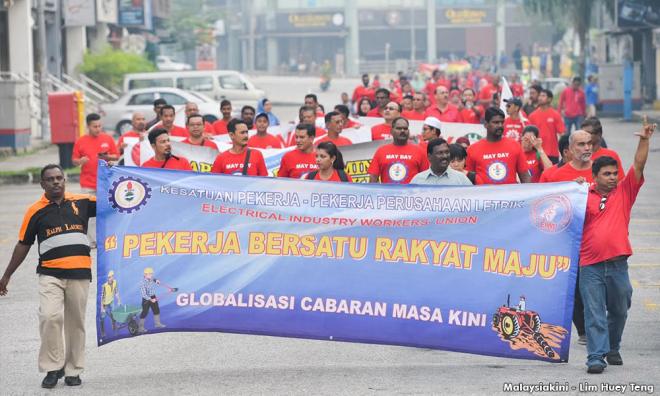 The need to honestly and fairly engage with labour

ADUN SPEAKS | The main issue for labour or trade unions in the country in the past, present and future, is their ability to function in a work environment that is free from government and employer encumbrances.

The need on the part of unions to independently chart their cause by voluntarily engaging with employers is the ultimate objective.

Of course, this idealism might not be achieved in reality, but the degree of freedom would vary from country to country based on the relative strength of labour in relation to the state and employers.

This is the issue with workers or the Malaysian Trades Union Congress (MTUC) which purports to represent about 15 million workers in the country, the majority of them in lower socio-economy categories.

MTUC might be just a labour centre organised under the societal registration without the benefits of a labour federation, but it is certainly the labour centre and the principal representative of 15 million workers in the country.

MTUC’s affiliated union membership might be around three million, representing the private and some public statutory sectors.

Is it right for MTUC to claim it represents 15 million workers, both unionised and non-unionised?

Even if the MTUC cannot claim it has membership through affiliates of 15 million, still the MTUC has the moral authority to speak on behalf of all the workers in the country as being the only labour center.

The benefits obtained for labour unless they are specific to the trade or industry apply to workers across the board.

Like all human agencies that want change for the betterment of the working class, MTUC has a share of its problems.

Leadership squabbles, matters pertaining to proper meetings and others have sought to derail MTUC from taking up the cause of the country’s working class.

Some even have argued whether there is a need for MTUC in the country.

As I have argued: the choice is a stark one. In the absence of MTUC, the position of workers will be considerably weakened; something that might be desirable to the employers and to some extent the state.

But certainly, the absence of MTUC might not augur well for the working class.

MTUC wants to engage with the state and employers in a just and fair manner.

However, the present tripartite council or the National Labour Advisory Council (NLAC) seems not to be an avenue.

By limiting the role of MTUC to one of consultation, the NLAC has the tendency to push legislations that might not be in the interest of labour.

MTUC faces difficulties in playing a meaningful role in the NLAC.

The tripartite mechanism is merely an euphemism to hide the unilateral nature of decision making with little or no input from labour or MTUC.

The recent amendments to the Industrial Relations Act 1967 might have brought some incremental relative benefits to labour, but the preponderant influence of the state or the Human Resources Ministry remains the stumbling block to labour freedom and voluntarism.

For unions to play an effective role in the country, there must be a recognition that some fundamental concerns of labour associated with freedom of association and voluntarism must be addressed.

These are some of the key matters that need to be addressed to rejuvenate the industrial relations system.

labour
communication
mtuc
labour union
Related Reports
In Vietnam’s ‘Billionaire Village’, migrant cash can buy a palace
a year ago
Survey: Migrant workers, refugees in M'sia fear speaking up on injustices
a year ago
Hiring of Nepalese security guards only temporary - Muhyiddin
a year ago
Gov't must migrate to living wage policy - Penang MTUC
a year ago