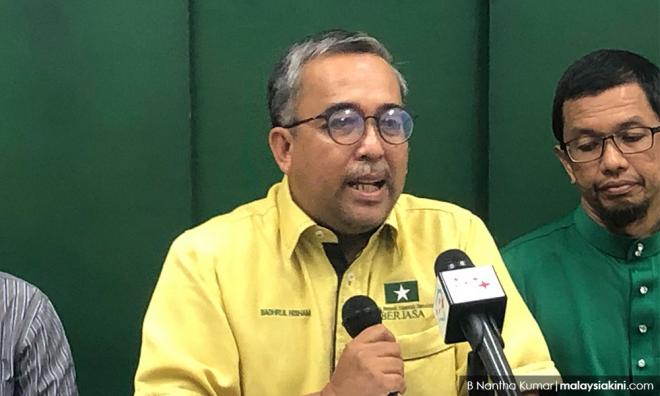 Saying it is unhappy with Islam 'being bullied' under Pakatan Harapan and BN's failure to select a Malay-Muslim candidate, Berjasa has decided to contest the Tanjung Piai by-election.

"Berjasa supports the PAS-Umno Muafakat Nasional to strengthen Malay political parties but the decision to allow MCA's Wee Jeck Seng to contest in Tanjung Piai is not in keeping with the aspirations of the Malay-Muslims.

"Berjasa has therefore decided to field a candidate in the by-election,” he told reporters at the party headquarters at D'Alpinia Business Park in Puchong today.

The party, he said was sticking to the principle of putting Malay-Muslim candidates first - "Undilah calon Muslim berwibawa” (Vote for a credible Muslim candidate).

He expressed his hope that Tanjung Piai voters would make a fair and wise choice following Harapan's failure to fulfill its promises in the last election, and he went on to claim that the coalition was dominated by DAP.

Berjasa was a splinter party of PAS that was established in 1978 following the acrimonious departure of the latter from BN following a dispute with Umno over the power structure in Kelantan.

It teamed up with Umno to defeat PAS in that year's state elections but has been of little relevance since 1982 when its support base collapsed.

All Berjasa candidates lost their deposits in the last two general elections.

No impact on PAS-Umno alliance

For the being, however, Badhrulhisham pointed out that Berjasa was still part of the Gagasan Sejahtera coalition which PAS had led into GE14.

"We didn't sign the agreement between PAS and Umno, and PAS did not consult with us as a Gagasan Sejahtera partner over the signing.

"So that means that Berjasa's decision to contest does not affect the PAS-Umno alliance," he said.

Gagasan Sejahtera was set up in 2016 as an intended third force incorporating PAS, Berjasa and Ikatan.

He acknowledged that Berjasa would be seen as a spoiler party and that whichever party lost, they could be blamed.

He claimed that Berjasa was capable of capturing 1,500 to 2,000 votes in the upcoming by-election.

A total of 44,948 voters from Tanjung Piai participated in last year’s general election.

The Tanjung Piai by-election is being held following the death of its incumbent Dr Mohd Farid Mohd Farik 42, of heart complications on Sept 21.

The Election Commission (EC) has set Nov 2 as nomination day and Nov 16 as polling day for the parliamentary by-election.