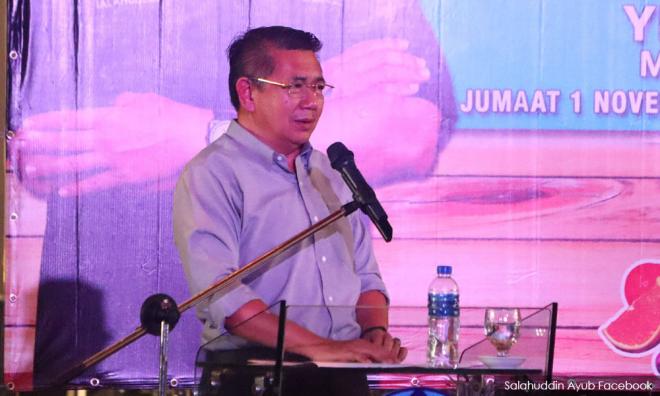 The government today approved allocation of RM2 million to assist caged fish breeders at Kampung Air Masin, Kukup near Pontian, who were adversely affected by the Lekima typhoon and for the rehabilitation of dilapidated fishing jetty in Tanjung Piai area.

Agriculture and Agro-based Industry Minister Salahuddin Ayub (pictured above) said RM1 million allocation was to assist 78 caged fish breeders while another RM1 million for the rehabilitation of the dilapidated fishing jetty.

He said the assistance was part of the government’s responsibility to assist the fishermen and not an attempt to ‘buy’ votes for the upcoming Tanjung Piai parliamentary by-election.

“As a native of Tanjung Piai, I will return to my village whenever I have the time. As agriculture minister, whatever assistance that they are asking for, we (the government) will fulfil it as soon as possible,” he told reporters after attending the ‘Makan Perpaduan’ programme in Pontian, Johor, today.

Salahuddin, who is also Pulai MP, said he had carried out at least eight assistance programmes for the fisherfolk in Pontian area including the release of crab seed, cost of living aid as well as visits to cockles breeding in Tanjung Piai.

“The government is concerned ... so we will give assistance, we will not wait until after the election (to help). For example, tomorrow, if after the nomination, disaster strikes, I will help and I don’t need to listen to what others are saying. This is a responsible government,” he stressed.

In August, 78 breeders lost RM5 million after thousands of their stock died due to water pollution which occurred after the Lekima typhoon struck.

He said the government also encouraged the development of agro-culinary sector by focusing on Malaysian dishes that use local raw materials to be standardised in terms of taste and presentation.

Meanwhile, he also urged residents and voters in the Tanjung Piai parliamentary constituency to look at the contribution of the late MP Dr Md Farid Md Rafik, while casting the ballots during the voting process on Nov 16.

Salahuddin, who is also Parti Amanah Negara (Amanah) deputy president, said what the people needed was a leader who would really assist them similar to what has been done by the late Dr Md Farid.

“The important thing is that I believe people can really evaluate. I also hope and believe that with Dr Farid’s track record, the people will be able to return the support to Pakatan Harapan and for us to retain the Tanjung Piai constituency,” he said.