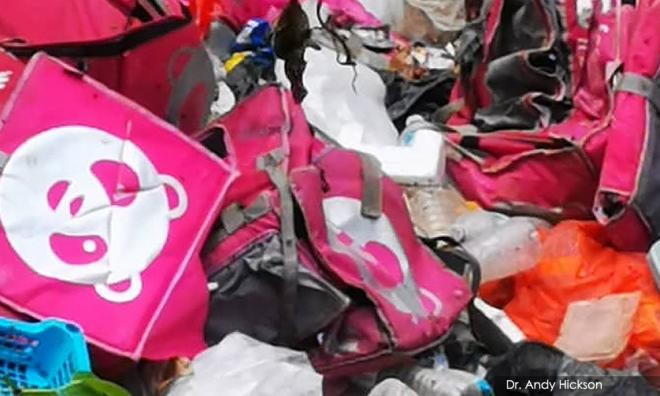 In light of the recent exposure of the illegal dumping of Foodpanda delivery bags in a jungle, the company has announced that it will be launching an immediate investigation with a visit to the site to remove the bags.

This comes after Malaysiakini carried a report this morning highlighting the plight of locals in the vicinity of the Orang Asli Hospital along Jalan Gombak who are unhappy that despite many complaints to the Selayang Municipal Council (SMC), the jungle site is being used as a dumping ground.

The issue was first highlighted by Andy Hickson, dean of the Faculty of Arts and Communication at Help University.

"We are in touch with Hickson, who has been kind enough to agree to show us the exact location so that we can effectively remove the dumped bags immediately," said the Foodpanda team in a written statement to Malaysiakini this afternoon.

"We work with suppliers to properly dispose of unusable delivery bags. They are dismantled, sorted by material type and then sent to recycling facilities," it added.

Highlighting sustainability as an important factor to Foodpanda, the team cited the launch of an opt-out option whereby customers can choose not to receive single-use plastic cutlery with their order.

Hickson, who is of British extraction but spent part of his adolescence growing up with the Temiar Orang Asli community in Kelantan, was on a hike in the area when he encountered the garbage strewn everywhere.

"I am always shocked when I see rubbish polluting the land on an industrial scale. I was disturbed to see waste obviously from a non-domestic source being dumped in the jungle.

"I could see that there were many layers of waste and was told by passersby that whenever the local council was informed they just used a bulldozer to push it down the hill further into the jungle.

"While I was there taking photos of the rubbish I noticed a lot of ‘Foodpanda’ waste amongst a lot of other rubbish," said Hickson, who made a short video and took photographs to highlight the dumping.

As far back as 2015, the area was one of 10 illegal dumpsites in the Gombak district that operated despite then Selangor menteri besar Azmin Ali ordering the SMC to take action.

These sites included 60 areas where garbage had been thrown indiscriminately.

Measuring between 4ha and 7ha each, the dumpsites were reported to be located in Sungai Pusu, Batu 8 Gombak, Kundang, Kuang, Kepong, Batu Caves, Rawang and Batu Arang.

Malaysiakini has contacted SMC for a further response to this matter.