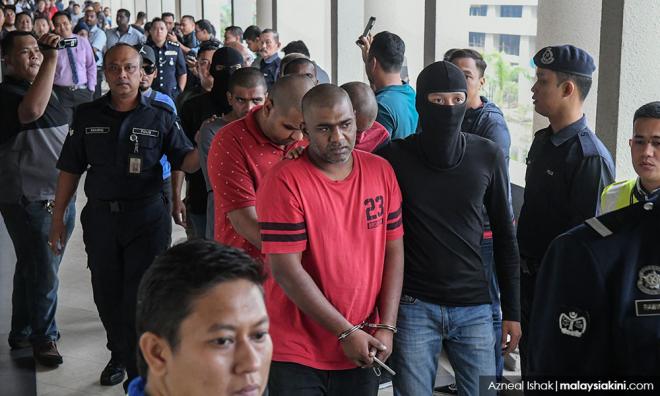 The Kuala Lumpur High Court today dismissed applications filed by five men, including two state assemblymen, to be released immediately from detention over their alleged links to the LTTE group.

Judicial commissioner Ahmad Shahrir Mohd Salleh said the habeas corpus applications have become academic and irrelevant because the applicants have been charged in court.

“Their detention expired once they were charged in court. As such, their applications are dismissed,” he said.

The applicants are G Saminathan, 34, and P Gunasekaran, 60, who are the assemblymen for Gadek and Seremban Jaya respectively; S Chandru, 38, and V Suresh Kumar, 43, who are DAP members; and technician S Arivainathan, 56.

Earlier, Senior Federal Counsel Muhammad Sinti, representing all the respondents, objected to the habeas corpus applications on the grounds that they have become academic after the applicants were charged in court.

He also said that all the applicants are being remanded at the Sungai Buloh Prison after having been charged in the Sessions Court here and in several states on Oct 29 and 31, along with seven other men, over alleged links to the LTTE terrorist group.

Lawyer Ramkarpal Singh, who represented the applicants, said the arrest and detention of his clients under the Security Offences (Special Measures) Act 2012 is illegal because, according to the charge sheet, the offences occurred after their detention.

The five men had stated in their applications, filed on Oct 21, that their detention under Sosma Act 2012 between Oct 10 and 12 is null and void.

They had also applied for the court to issue a writ of habeas corpus for their immediate release from detention, as well as other relief deemed appropriate by the court.

Ramkarpal, when approached by reporters outside the court, said he will file an application tomorrow to challenge the provisions under Sosma.

court
ltte
habeas corpus
ramkarpal singh
Related Reports
M'sia has its own laws to classify terrorist groups - police
a year ago
Grocery shop owner files suit to declare Sosma provision unlawful
a year ago
Lawyer: Cops have CCTV, why ask proof of torture in LTTE case
a year ago
Allegations of police misconduct against LTTE detainees baseless: IGP
a year ago