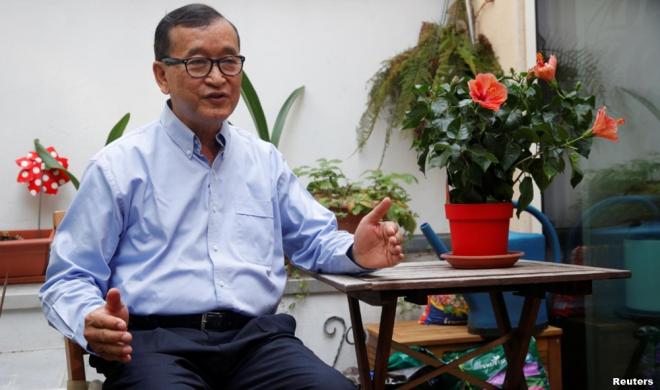 Cambodia’s self-exiled opposition party founder Sam Rainsy, who has vowed to return to his home country to lead demonstrations against authoritarian rule, said he had been prevented on Thursday from checking-in for a flight from Paris to Bangkok.

Rainsy apparently being barred from boarding came a day after Malaysia detained his party’s vice president, Mu Sochua, at an airport before releasing her 24 hours later.

Cambodia’s longtime Prime Minister Hun Sen, whose government has arrested some 50 opposition activists inside Cambodia and deployed troops to the border, has characterised the returning leaders’ planned rallies as an attempted coup.

Rainsy (above) told Reuters at Paris’ Charles de Gaulle Airport that Thai Airways staff refused to allow him to board but that he would not be deterred from trying again.

“I’m not allowed to board. They said they have received from very high up the instruction not to allow me to board,” he said.

“I’m very shocked, I’m very disappointed. I want to go back, my people are waiting for me.”

A Thai Airways representative declined to comment, citing passenger confidentiality, responding to a question in an instant messaging forum with reporters.

Rainsy, former finance minister and the founder of the now-banned opposition Cambodian National Rescue Party (CNRP), has lived in exile in France since fleeing Cambodia four years ago following a conviction for criminal defamation. He also faces a five-year prison sentence in a separate case.

He says the charges were politically motivated to destroy opposition to Hun Sen.

In a video message to supporters on Facebook, Rainsy vowed to return.

“We will find a way to go to Cambodia in a short time in the future to push for change,” he said.

Thailand had also refused entry to Mu Sochua, former women’s affairs minister, on Oct. 20. Using her US passport, she later flew to Malaysia, where she was detained at KLIA.

Malaysia this week also detained two other opposition leaders trying to fly to Thailand, presumably to cross into Cambodia by land.

Sochua (above) and the other two Cambodian activists were released on Thursday night and left the airport, Malaysian human rights commissioner Jerald Joseph said.

“They will be staying at a hotel in Kuala Lumpur. Sochua has a visa until Nov 12,” said Joseph, who did not know the length of the visa granted to the two others.

Mu Sochua fled Cambodia in 2017 fearing arrest amid a mass crackdown on the opposition.

The CNRP’s leader inside Cambodia, Kem Sokha, was arrested on treason charges in 2017 and remains under house arrest.

Cambodia’s supreme court later dissolved the CNRP. The party of Hun Sen, who has ruled Cambodia for more than three decades, went on to win all the seats in parliament in an election last year.

Hun Sen on Thursday assured Cambodians not to worry about any disruptions during next week’s annual Water Festival, which features boat races. He said his government was seeking to arrest nine suspects and “these nine people won’t come.”

Hun Sen also urged any remaining CNRP loyalists to turn themselves in to authorities. “Come out soon, don’t hide anymore …come on and confess, and if you don’t come out, you will be arrested wherever you are seen,” he said in a speech. - Reuters