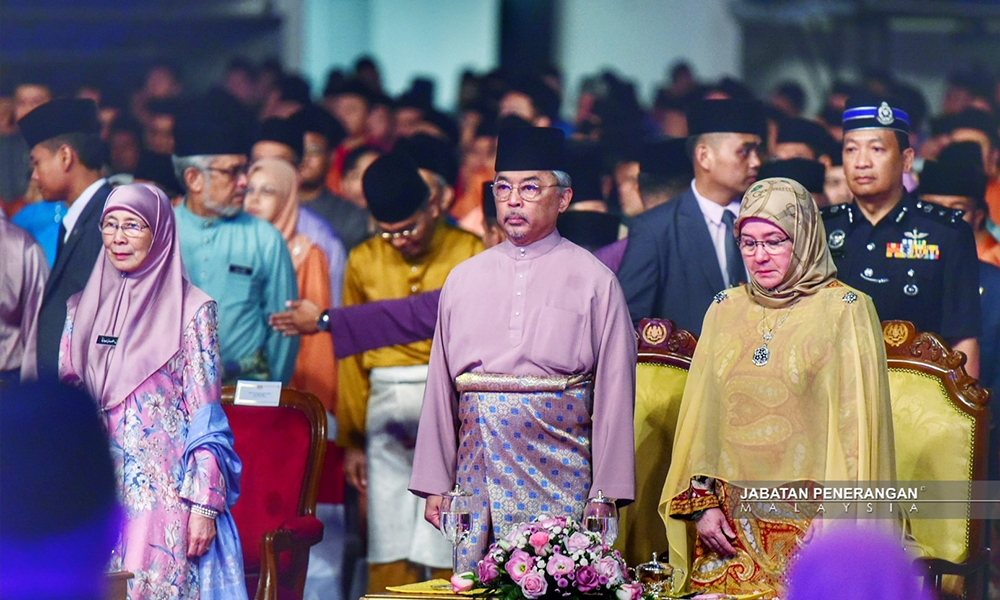 Muslims across Malaysia enlivened Maulidur Rasul celebrations this year with parades and chanted the selawat (salutations upon the Prophet Muhammad) in observance of the birthday of Prophet Muhammad.

Over 8,000 participants in 100 contingents comprising public and private agencies, statutory and uniformed bodies, schools and universities took part in the parade, which began at 7.45 am.

Ninety-three contingents with a total of 3,000 participants from state government departments, agencies, uniformed bodies and non-governmental organisations flocked to the field from 7 am for the 600-metre parade.

A total of 1,710 participants from 30 contingents took part in this year’s parade.

In SABAH, the Yang di-Pertua Negeri Sabah Juhar Mahiruddin and his wife, Norlidah RM Jasni joined 8,000 people in the state-level Maulidur Rasul parade from Sutera Avenue to the state mosque.

In his speech, Juhar also called for the culture of innovative thinking to be inculcated among the young generation to increase competitiveness in a bid to improve the socio-economic status of the people and the state.

In SARAWAK, the state-level Maulidur Rasul celebrations began with the chief minister addressing Muslims in the state, calling on them to commemorate the birthday of Prophet Muhammad and be grateful for having been blessed with the last prophet and messenger of Allah to mankind.

“Even though Prophet Muhammad (pbuh) is dead, his struggle to spread knowledge of Islam, peace, justice and good will not end, as we will continue his struggle to ensure that Islam will remain relevant and respectable,” he said.

Abang Johari then joined 11,000 participants from 279 contingents in the parade which covered a total distance of 7.7km around Kuching.

In MELAKA, 93 contingents with a total of 5,100 participants participated in the 2.5km parade from Hang Tuah Stadium to Dataran Pusat Islam, Bukit Palah, led by Chief Minister Adly Zahari.

Of the total, 61 contingents were from public and private agencies, 15 contingents of various associations and 17 contingents involving schoolchildren.

It was graced by the Sultan of Kedah Al Aminul Karim Sultan Sallehuddin Sultan Badlishah and the Sultanah of Kedah, Sultanah Maliha Tengku Ariff.

In SELANGOR, the Sultan of Selangor, Sultan Sharafuddin Idris Shah graced the state-level Maulidur Rasul held at the Malawati Stadium.

Earlier, Tengku Amir joined 3,850 participants from 77 contingents comprising members of various public and private agencies in the Maulidur Rasul parade, covering a distance of 2.3 km from the mini stadium in Section 13 to the Malawati Stadium.