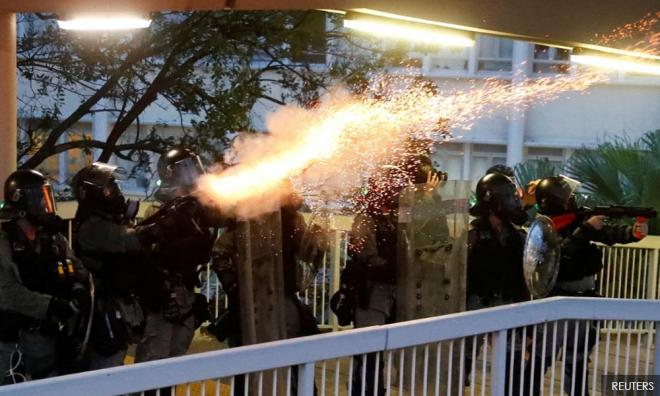 Hong Kong riot police fired tear gas at a university campus today, a day after a protester was shot and a man set on fire in some of the worst violence to rock the Chinese-ruled city in more than five months of anti-government demonstrations.

Some railway services were suspended and roads closed across the Asian financial hub for a second day, with long traffic jams building in the morning rush hour.

Riot police were deployed at metro stations across the territory and large queues were forming at railway platforms as commuters made their way to work.

Universities and schools cancelled classes, with students, teachers and parents on edge a day after police fired tear gas and students hurled petrol bombs on some campuses.

More than 260 people were arrested yesterday, police said, bringing the total number to more than 3,000 since the protests escalated in June.

The metro station at Sai Wan Ho on eastern Hong Kong island, where a 21-year-old protester was shot yesterday, was among those closed.

A water cannon truck was stationed outside government headquarters, where the city’s Executive Council was due to hold its weekly meeting.

Hong Kong’s embattled leader Carrie Lam said yesterday the violence in the former British colony has exceeded protesters’ demands for democracy and demonstrators were now the enemy of the people.

Protesters are angry about what they see as police brutality and meddling by Beijing in the freedoms guaranteed under the “one country, two systems” formula put in place when the territory returned to Chinese rule in 1997.

China denies interfering and has blamed Western countries for stirring up trouble.