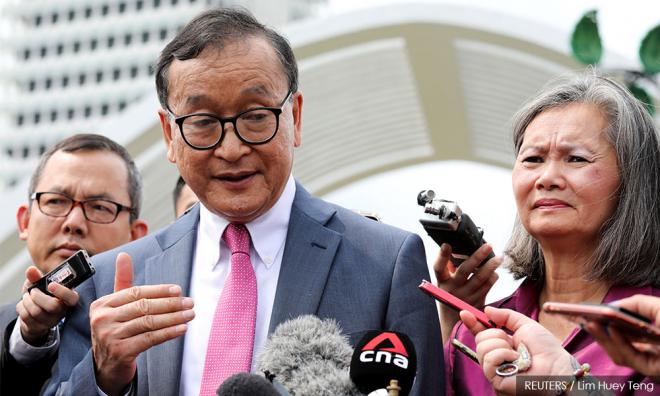 Malaysia Airlines (MAS) said yesterday it had barred veteran Cambodian opposition figure Sam Rainsy from taking a flight from Kuala Lumpur to the Indonesian capital Jakarta on the instruction of Indonesian authorities.

Rainsy later said on Twitter that he had missed his flight and would try to get another Malaysia Airlines flight to Jakarta today.

Rainsy, who lives in self-imposed exile in France, has been in Malaysia since the weekend after initially saying he planned to return home on Saturday to rally opposition to Cambodian authoritarian ruler Hun Sen.

“Malaysia Airlines denied boarding of the said passenger under the instruction of the Indonesian authorities,” Malaysia Airlines said in a statement in response to a Reuters question as to whether Rainsy had been stopped from boarding.

Asked about the Malaysia Airlines statement, Sam Fernando, the Indonesian Immigration Directorate General spokesperson, said that “from the Immigration’s side, there has not been a request to deny his entry here”.

Denny Abdi, director of the Southeast Asia Division of the Indonesian Foreign Ministry said: “We are not aware of him coming to Jakarta.”

Rainsy had said he planned to return to Cambodia on Saturday, his country's Independence Day, in what Prime Minister Hun Sen characterised as an attempted coup against his rule of more than three decades.

But Rainsy was blocked in Paris from boarding a Thai Airways flight to Bangkok on Thursday. He then flew to Malaysia, saying he wanted to rally support for the Cambodian opposition in the region.

world
sam rainsy
cambodia
indonesia
malaysian airlines
Related Reports
Rainsy: Now is the right time to return to Cambodia
a year ago
China is turning Cambodia into a colony, claims exiled leader
a year ago
Sam Rainsy: Thousands of supporters will walk with me into Cambodia
a year ago
Cambodian opposition leader inspired by M'sia's democratic change
a year ago