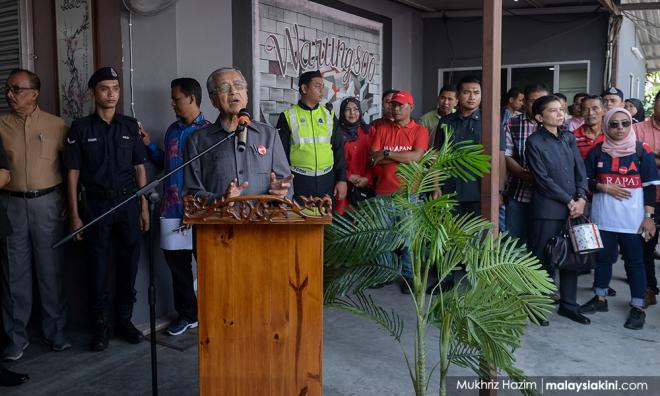 PM reminds voters he is no longer with BN

TG PIAI POLLS | Prime Minister Dr Mahathir Mohamad said today the people should not allow themselves to be fooled into thinking that he is still the leader of the opposition BN.

He said the BN was trying to portray that impression to confuse the people in the ongoing Tanjung Piai parliamentary by-election campaign.

There are claims that there were still some residents in Tanjung Piai, especially those from the outskirts, who were still under the impression that Mahathir was leading BN and Umno.

His presence in Pontian was to clarify that misperception and to also urge them to throw their support behind Harapan candidate Karmaine Sardini, 66. Polling in the by-election takes place this Saturday.

In a media conference after the event, Mahathir said the Harapan camp had also come across leaflets with Karmaine's picture and the "Buy Muslim First" logo on them, which the prime minister added was clearly not part of Harapan's campaign material.

"I hope the people here would not be duped by BN's incitements, (as) the party lies in many ways. The other day they showed pictures of me clad in blue attire and it looked like I was campaigning for the BN candidate.

"This is a lie. Today, there are leaflets seeking support for Haji Karmaine, but with a Buy Muslim First logo on it as well. All done just to anger the Chinese," the prime minister said.

Nevertheless, Mahathir said he was not worried that these lies would go on to hoodwink the Tanjung Piai electorate, adding that the people were much more smarter than that.

"The Tanjung Piai voters are not stupid. They have gone through 14 (general) elections. They are well versed with trickery. This time around, BN is lying. We find that the Tanjung Piai folk are very careful in these matters," Mahathir said when asked whether the people could possibly fall for the Opposition's tricks.