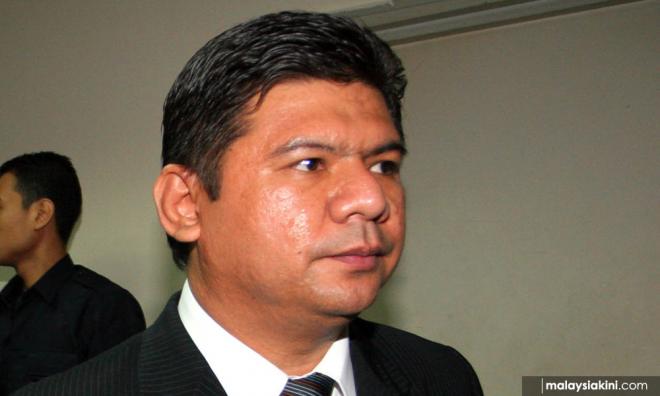 The Teoh Beng Hock Trust for Democracy (TBH Trust) has reacted with shock upon learning that the coroner in Teoh Beng Hock's inquest was slapped with a corruption charge on Nov 6.

Former Kuala Kubu Bahru Sessions Court judge Azmil Muntapha Abas (photo, above), 45, who is now working as a legal officer at the Putrajaya Courts Complex, was charged with accepting RM17,500 in bribes as an inducement to mete out lighter sentences to seven illegal immigrants who had been charged under Section 6(1)(c) of the Immigration Act 1959/63.

"The corruption charge shows the integrity of Azmil Muntapha Abas is questionable, and it raises doubt about whether there were undue influences and monetary benefits in previous cases ruled by him, including the inquest into the death of Teoh in 2009," said TBH Trust chairperson Ng Geok Chee in a statement today.

She highlighted that the inquest was concluded in 2010 as an open verdict despite the coroner admitting that there was a pre-fall injury on Teoh's neck.

"The ruling was then overturned by the Court of Appeal on Sept 5, 2014, which said one or more unknown persons caused the death of Teoh.

"Therefore, the TBH Trust urges the government to conduct a thorough investigation into the possible undue influence and monetary benefits involved in the inquest into the death of Teoh," she said.

Ng called for a police reinvestigation into the death of Teoh which must probe all available clues and key persons involving in the case, including MACC officers, police officers, coroner, pathologist and others.

"We demand that the police look into the police reports lodged by us a few months ago and investigate 10 MACC officers under the provisions of murder or homicide," she said.

On Tuesday Selangor police called in Seri Kembangan assemblyperson Ean Yong Hian Wah as part of its reinvestigations into the death.

He told Malaysiakini that the police told him they had received instructions from the Attorney-General's Chambers to reopen the case."

In 2016, the Attorney-General's Chambers had found no criminal element in Teoh's death.

Teoh was found dead after falling from the ninth floor of Plaza Masalam, MACC's former Selangor headquarters in Shah Alam, where he had been held overnight for questioning.