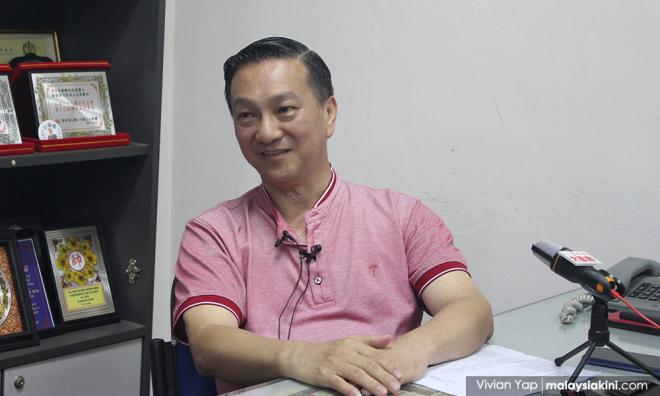 MP SPEAKS | It is most extraordinary that the PAS, Umno and MCA candidate for Tanjung Piai, Wee Jeck Seng, should be playing the “disappearance” game at the most important MCA by-election media conference yesterday, which would be the last day the media conference would be covered by the media as whatever said today would not be reported tomorrow, the polling day for Tanjung Piai by-election.

Why was Jack Seng conspicuously absent at the MCA’s last and most important media conference yesterday?

Here is the real story behind Jeck Seng’s 20-hour political acrobatics of courage and bravery and his “disappearance” game.

On Wednesday at 7.48pm, Jeck Seng posted on his Facebook that “MCA unites to oppose Jawi”, which lasted for some 20 hours, but at 4.41pm yesterday, this particular line was amended to read: “MCA unites to oppose the addition of Jawi khat (calligraphy) in the Bahasa Malaysia curriculum in Chinese and Tamil vernacular schools.”

Why did Jeck Seng disappear from the last and most important MCA media conference in the by-election yesterday?

We are not saints and we are capable of making mistakes. Is there anything wrong with Jeck Seng admitting that he had been wrong to put up his original posting, that the pressure from Muafakat Nasional of PAS and Umno was too powerful for him to resist for more than 20 hours and that he had to back-track, withdraw and amend his Facebook posting?

Jeck Seng knew that if he had attended the media conference, he would be asked by the media to explain a number of things.

Firstly, why he put up the original posting that “MCA unites to oppose Jawi” and why he bowed down to pressure from Muafakat Nasional of Umno and PAS to delete and amend his original posting.

The questions would not end here.

In fact, it would lead to questions about the Education Ministry Curriculum Committee meeting on Sept 21, 2015, which was chaired by the then education minister Mahdzir Khalid and attended by the two deputy education ministers at the time, Chong Sin Woon (MCA) and P Kamalanathan (MIC), which decided that new textbooks for Chinese/Tamil primary schools would introduce Jawi subject for Std IV pupils in 2020.

This would mean that former claims by MCA leaders that they did not know about the proposal to have Jawi in Std IV Bahasa Malaysia textbooks for Chinese and Tamil primary schools were simply lies and do not stand up to examination, as the revised curriculum to introduce Jawi in Std IV was decided by MCA, Gerakan, MIC, SUPP and Umno ministers in September 2015.

This would also put the MCA president, Wee Ka Siong, on the spot, for he was a minister in Najib Razak’s Cabinet in 2015, and cannot claim that he did not know about the Education Ministry Curriculum Committee decision in September 2015 for the full implementation to include Jawi in the revised textbooks from 2020 onwards.

The Jawi subject controversy was a legacy of the former government, as after the final decision of the Education Ministry Curriculum Committee on Sept 21, 2015, it became an administrative matter for the relevant Education Ministry divisions to implement the policy decision.

If there had been no change of government in the 14th general election on May 9, 2018, the implementation of the Education Ministry decision on new curriculum in September 2015 would result in students in Chinese/Tamil primary schools from Std IV upwards to learn to read, write and to be examined in Jawi.

But, as a result of the intervention of the DAP ministers in the current cabinet, Jawi is now an optional result and it is not necessary for Chinese and Tamil primary school students to learn to read, write or to be examined in Jawi.

Jeck Seng disappeared from the last and most important MCA media conference yesterday because all these facts would have to come out, which are not in favour of MCA leaders or MCA.

In the past few days, Jeck Seng had been evading questions about integrity, whether about the RM150 million Vehicle Entry Permit (VEP) system or his stewardship as chairperson of Labuan Port Authority.

With such an ambivalent stance, one can understand why, in his two terms as MP for Tanjung Piai, he did not ask a single question on the 1MDB scandal and why the people of Tanjung Piai cannot depend on him in the mission to transform Malaysia from a global kleptocracy to a leading nation of integrity in the world.

What is most noteworthy is that former prime minister Najib spoke in a Muafakat Nasional by-election ceramah in Tanjong Piai last night – which is the first time Najib had ever spoken on stage after his catastrophic 14th general election results.

Clearly, Najib is hoping that the Tanjung Piai by-election will be a stepping stone, not only for the Barisan Nasional to return to power, but for him to become prime minister again.

When the voters of Tanjung Piai cast their vote tomorrow, this is one consideration they have to take into account.