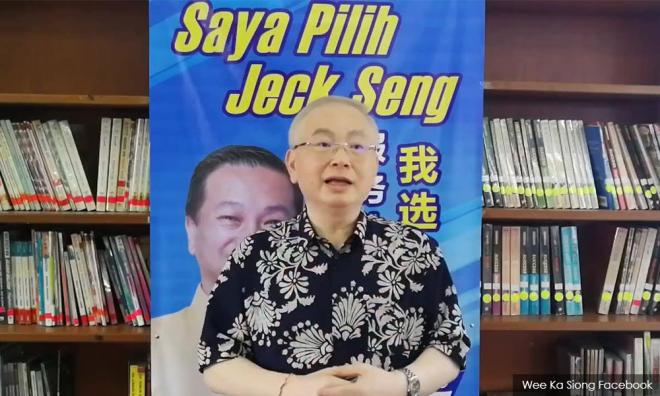 TG PIAI POLLS | MCA president Wee Ka Siong has urged Tanjung Piai voters to use tomorrow’s by-election as an opportunity to send a message to the Pakatan Harapan government.

In a video uploaded on his Facebook page just eight hours before the end of the campaign period, Wee (above) said Harapan needed to be reminded about its promises.

"To the people of Tanjung Piai, this is a good opportunity to send a message to the Harapan government which has been in power for 1.5 years but have made many U-turns and failed to fulfil its manifesto.

"The policies that they introduced have only caused the people to suffer," he said.

Urging voters to back the party's candidate Wee Jeck Seng, he said the BN candidate can also serve as a check and balance against the government.

"We want to give a chance to the opposition. We want a louder voice in Parliament.

An opposition MP can act as check and balance in the Dewan Rakyat.

Campaigning began on Nov 2 and Tanjung Piai voters would go to the polls tomorrow.

The by-election was called after the incumbent MP, Bersatu's Dr Md Farid Md Rafik, died from a heart attack in September, just three weeks before his 43rd birthday.