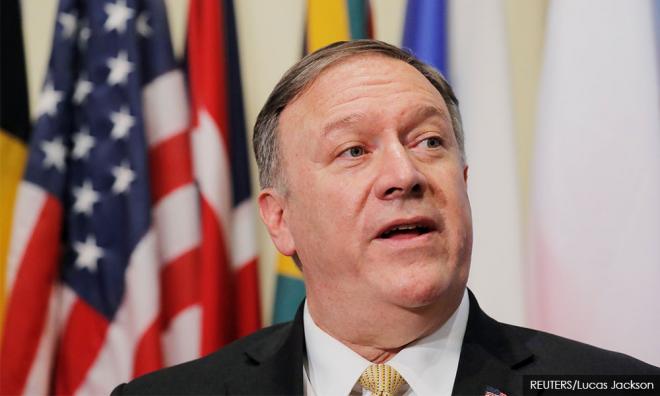 The Embassy of Palestine in Kuala Lumpur has condemned the US administration's announcement yesterday that Israeli settlements in the West Bank would no longer be viewed as illegal.

It said the announcement made by US Secretary of State Mike Pompeo (photo) was a violation of international law, decades-long international consensus over the issue and determinations of the International Court of Justice, the High Contracting Parties to the Geneva Conventions and the United Nations (UN) Resolutions.

Among others, the UN Security Council Resolution 2334 (2016) reaffirms that Israel's settlements in the Palestinian territory occupied since 1967, including East Jerusalem, had no legal validity and constituted a flagrant violation under international law.

"The current US administration has adopted an anti-Palestinian agenda and endeavoured to empower and legitimise the Israeli colonial settler agenda.

"This ideologically driven and irresponsible policy, including this most recent announcement by Secretary Pompeo, proves beyond any doubt that the current US administration has aligned itself with Israel's illegal colonial enterprise," the embassy said in a statement today.

With this, the US has also failed to meet the most basic requirement to play any role in any future settlement, it added.

According to international media reports, Pompeo had said the US administration will no longer abide by the State Department's 1978 legal opinion which deemed the Israeli settlements as "inconsistent with international law".

It said this can be done by recognising the State of Palestine on the 1967 borders including East Jerusalem as its capital, insisting on full respect for international law and adherence to the UN Charter.

The Palestinian leadership will also continue to take all measures possible to honour its moral and political responsibility towards the Palestinians, and defend their national rights including the right to a life of dignity, freedom and prosperity, it said.