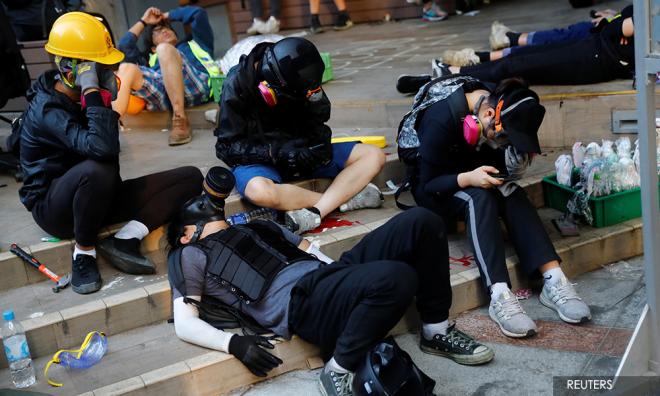 Hong Kong's embattled leader Carrie Lam said today she hoped a standoff between police and a hold-out group of anti-government protesters at a university could be resolved and she had told the police to handle it humanely.

A last group of about 100 defiant protesters remained in the Hong Kong Polytechnic University, which has been surrounded by police, after more than two days of clashes in which more than 200 people have been injured.

Lam spoke at a news conference shortly after the city's new police chief urged the support of all citizens to end more than five months of unrest, triggered by fears that the Chinese central government is stifling the city's special autonomy and freedoms.

In what many will see as an illustration of China's tightening grip, its top legislature questioned the legality of a Hong Kong court ruling that a proposed ban on face masks worn by protesters was unlawful.

The legislature said Hong Kong courts had no power to rule on the constitutionality of city legislation, according to state media outlet Xinhua.

Lam said her government was very much on the "reactive side" in dealing with the protests but she did not rule out more violence even as she urged peace.

"If the protesters are coming out in a peaceful manner ... then there is no situation when that sort of violence would happen," she said.

However, police would have to take "necessary action" if the situation changed, she said. Lam said she had been shocked that campuses had been turned into "weapons factories".

The university is the last of five that protesters occupied to use as bases from which to disrupt the city, blocking the central cross-harbour tunnel and main roads and forcing the closure of businesses including shopping centres, in order, they said, to put the government under economic pressure.

About a dozen protesters tried to flee through the university's sewerage system, according to a Reuters witness who saw them lower themselves into a tunnel wearing gas masks and plastic sheets to cover their bodies. They were not able to escape and had to retreat back onto the campus.

"They've made it clear, everyone here will be arrested," said Kelvin, 20, one of the students left on the campus.

Hundreds of protesters fled from the university or surrendered overnight amid running battles on surrounding streets as police fired tear gas, water cannon and rubber bullets, and protesters lobbed petrol bombs and bricks.

At one stage, dozens of protesters staged a dramatic escape from the campus by shimmying down plastic hosing from a bridge and fleeing on waiting motorbikes as police fired projectiles.

Many protesters, some injured, huddled together inside the main campus building, waiting for medical workers to help them leave. Some said they had three options: surrender to police, be taken away by ambulance or try to flee.

Many protesters say they fear even more bloodshed with no resolution in sight to a standoff that has seen some of the most intense violence in what has become the worst crisis since Hong Kong's return from British to Chinese rule in 1997.

Protesters were initially angered by a now-shelved bill that could have sent people to mainland China for trial but their campaign has broadened into calls for full democracy and an end to what many see as meddling by Beijing in China's freest city.

China says it is committed to the "one country, two systems" formula introduced in 1997 granting Hong Kong autonomy and has accused foreign countries, including Britain and the United States, of inciting trouble.

City police deny accusations of brutality and say they have shown restraint.

Newly appointed Police Commissioner Chris Tang warned of an "institutional mismatch" with which his 30,000-strong force was having to contend with.

"There is a massive scale of breaking of the law in Hong Kong and there is a certain sector of the community that also condones that illegal activity," Tang said in a brief public appearance.

He also said, "fake news" was undermining the reputation of a force that had long been known as one of Asia's finest.

Hundreds of people, many office workers wearing masks, gathered in the business district this afternoon. Police hemmed them in and the protest was largely peaceful.

Such "flash mob" protests in the heart of the city have happened on a daily basis over the past week, but overall, the number of people demonstrating has fallen.

But the violence has worsened since last week when police shot a protester, a man was set on fire and the financial district was filled with tear gas in the middle of the workday.

Police spokespersons said they fired three live rounds early yesterday but no one was hurt.

Some train services and many roads across Kowloon remained closed. All schools were shut again today, extending a string of closures since last week due to safety concerns.

The city's hospital authority reported 221 injuries over the past day, with 12 people in serious condition.

In Washington, US Secretary of State Mike Pompeo said the United States was "gravely concerned" and the Hong Kong government bore primary responsibility for ensuring a return to calm.