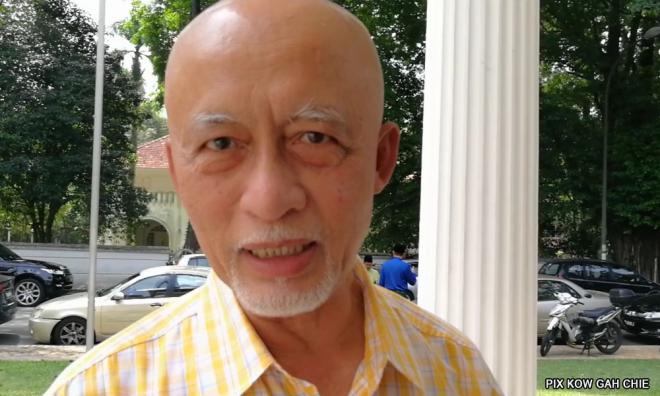 The Umno veterans club has hit out at the 17 Umno MPs who attended a meeting at the house of PKR deputy president Azmin Ali on Monday night, saying that they are "upset with the political shadow play".

"The meeting of the 17 Umno MPs at the residence of Azmin Ali should never have happened," club secretary Mustapha Yaakub (photo, above) said in a statement today.

He dismissed the explanation by Umno president Ahmad Zahid Hamidi that the MPs were there to discuss channelling government projects to their constituencies as "childish and humorous".

"Usually an MP will meet a minister in his office to discuss the project rather than go to his house at night in a large group," Mustapha said.

"Looking at the current political situation, the veterans club believes the meeting was linked to an attempt to save Prime Minister Dr Mahathir Mohamad from a vote of no confidence by (designated successor PKR president) Anwar Ibrahim."

Mustapha said that grassroots Umno members are tired of this sort of irresponsible conduct by their leaders.

"The veterans club believes that Umno MPs should not be involved in Pakatan Harapan plots, which are their own internal problems.

As the opposition, they should avoid being dragged into the issue and becoming a tool for dissent within Harapan," he added.

Mustapha urged these "actors" to stop pursuing their shadow play as it could undermine Umno's integrity as a credible opposition.

"They are obliged to abide by the decision made by the Supreme Council stipulating that any action involving the party should be done 'en bloc' and not in this sort of group," he said.

Anwar, meanwhile, called on Azmin to explain why such a meeting was held.

PKR is expected to hold a political bureau meeting tonight at the Parliament complex. Azmin has said he will attend if he is free.